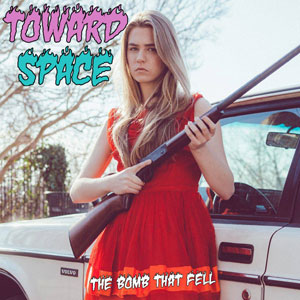 Opening song “The Bomb That Fell” put you straight into the band’s world made of crazy garage rock’n’roll and spooky atmospheres, something you don’t hear much these days when you think about it. “Black Cat” sounds more 90s grungy/noisy rock while “Night Sorrows” is straight punky power pop with a MISFITS/RAMONES touch.
The mix of female/male vocals works really well and adds even more variety to these seven songs, since the band can easily jump from punk rock to noisy pop with KATE BUSH intonations (‘Dream Love Kill”), or wild chaotic garage with a bubblegum touch (“Swamp Theme.”) When listening to this album, you might think it’s quite surprising, almost confusing at times, but wait until you hear “Take Peace”, a 60s/70s influenced pop ballad with a guitar solo bringing J. Mascis to mind, or the powerpop/psychedelia mix in “Black Magic.”
“The Bomb That Fell” is the perfect title for this risky, uncompromising album, and hearing this from a young band is quite refreshing! /Laurent C.