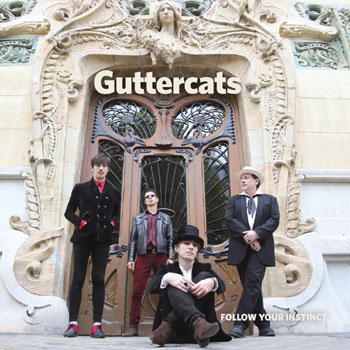 Paris’ GUTTERCATS are back with a 4th album already. Opener “A Trip Down Memory Lane” displays more pop influences than in their previous works, although you still can hear the obvious GUN CLUB influence. The band also gets darker with “(Beyond The Limits) Before I Die”, the guitars still have this cowboy slide feel, and the drums sometimes get crazy à la Keith Moon. You’ll hear some 60s influences in “I Wonder”, “I Promise” (and its psychedelic end), as well as in the sax infused ballad “Sweet Little Sister” (not to be mistaken for SKID ROW‘s famous sleaze rock’n’roll hit!)
My personal favourite is probably “Follow Your Instinct” and its repetitive, yet groovy hypnotic post-punk tones.
The band’s music sometimes gets close to NICK CAVE‘s (“Don’t Cry On My Shoulder”), and often gets drama-romantic (“Down In a Hole”, “No Remorse No Regrets”) although “On The Road” reminds me of Guts’ old band BABY STRANGE since it goes more into early 90s British glam rock’n’roll territories.
The production of this new album fits the band very well since it sounds live enough to imagine how these songs can sound once they are played on a stage and under the lights.
Let’s face it, GUTTERCATS are only getting better and better with age, just like good wine!/Laurent C.