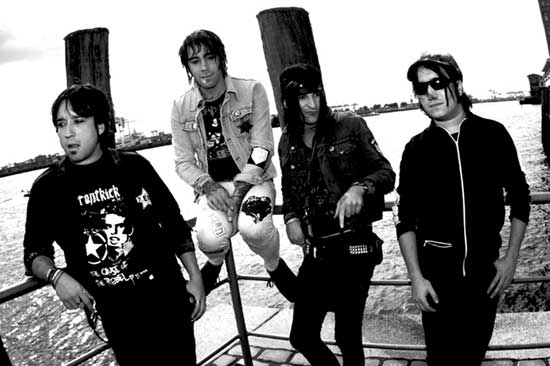 “What’s Inside You!?”, the third album from German glam punks 2nd DISTRICT has been released a few days ago, so that’s probably the right time to learn more about their story and influences. Marc de Burgh (vocals/guitar) answered our questions…

You played in The REVOLVERS before playing in 2nd DISTRICT. Can you tell us a bit about the two bands?

Yes, I played with The Revolvers : was a founder member, sung about one third of the songs and was playing lead & rhythm Guitars. We recorded two albums on PLY records : “A tribute to Cliches” (2001) and “End of Apathy” ( 2003) ….Did lots of gigs and were touring all around Europe at that time .We both , first met in those days on one of our side trips and we made an interview. 😉
Around 2003/2004, we also reunited District; my first 77 punk rock band from the 90s, because I met Pascal Briggs again in those days, we planned to continue with District and recorded that exciting album ” Don t Mess with the Hard Punx ” quite soon ……It was also released on PeoplelikeYou Records. After touring with District and being part of the PLY Label Tour in 2005 things came thick and fast in those days . Both bands The Revolvers and also District broke up within a few moths , because of personal and artistic differences, and so we founded 2nd District with past members of both bands , because we wanted to go on with playing and we wanted a reference to one of the former bands, so we chose the name 2nd District..I know that’s not very inventive 😀 . But it was all haywired that time.

Tell us about your new album “What’s Inside You?” How different is it from your previous
albums to you? It seems like you put more emphasis on melodies in these new songs…

Yeahh ..”What’s Inside You !!??”… I’m so glad that the album is out now !!!.It was a lot of work, in a way we did all this in DIY .
We didn t get any money from a record label or anyone else, these times are gone ! So we recorded the whole album in our rehearsal room 🙂 in Bochum ..Our Guitarist Dani was interested in recording technics anyway, he did a good job and we are glad we finally found a good record label.
Musically: Well, we tried to combine the rawness of 77 punk rock , pop appeal, a certain sense of androgyny and lots of aspiration in our music ..and yes, I put more emphasis on melodies … We also tried to improve the arrangements of the songs …..some parts are more quiet, some are more aggressive – all this in order to make the songs …..hmmm  more interesting , maybe !!??

How do you usually write the songs? Is there a main writer?

Well, most of the time I come with an idea ,with a fundamental structure of a song and we figure it out all together ..I elaborate the melodies, and after that I write the lyrics …

You played at the Rebellion festival a few times I think. How was it? Have you played other shows in the UK?

No , 2nd District just played the Rebellion festival two years in a row…didn t have other gigs in the UK so far . There was a tour planned for District in 2004 in order to promote the fancied “Don t Mess ..” album. They planned some shows with the Varurkers, but it never happened unfortunately . But I hope that we’re gonna make it to a whole UK Tour one day …maybe with the new album .. we received some offerings for gigs in the UK after having played on the festival in Blackpool this year – we’ll see … I’m looking forward.

What are your best tour experiences so far?

OHH , there are so many impressions ..so many things happened – really enjoyed the last European tour with Prima Donna ..Hope we will have the chance to repeat it one day..

I met Schwuppi (bass) in Berlin a few weeks ago. He told me he just relocated there. Do all the other members live in the same city/area?

Well, Schwuppi moved to Berlin a couple of weeks ago, and the rest of the band isn’t located in the Berlin -Area.We’re actually based in the “Ruhrgebiet “, in the very West of Germany , a former industrial region ..a melting pot – the right preconditions to form a PunkRock Band ..
The Ruhr-area is an agglomoration of several major cities ..with names like Dortmund , Bochum , Essen , Duisburg you could be quite familiar with …once they were lots of coal-mines and metal industry located like….. maybe …in Lothringen ( Lorraine ) in France ..but that’s almost all gone …In Bochum (my hometown ) 2016, the manufacturing of Opel cars will be stopped ….because General Motors decided to close the plant in Bochum, though the location is actually efficient  ..that’s how captalism works, they don t care bout the people..the capitalist don t feel stationary in this way – he goes there, where he can expect the biggest profit, especially when we are talking about a global player like General Motors. 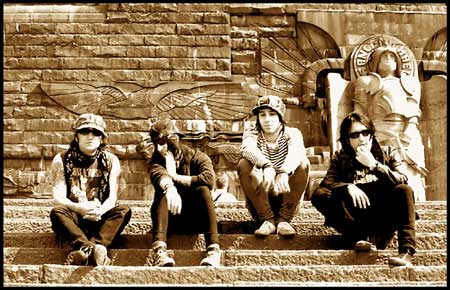 What’s your view on the music business these days? Is it still worth releasing CDs? How is vinyl important for a band like you?

Well ,that’s what I mentioned before….It’s very hard for a band to sell records these days, we all know that! …Downloading , a free Internet- all this means or brought us lots of benefits – that’s obvious … But on the other hand many things changed, caused by these technical improvements ….and nowadays the whole consumer behaviour relating to the method they hear music , the way they consume music has completely changed …. In the 80s or 90s – if you were buying an album or later a compact disc ..you couldn t wait to come  home , open the packing and listen to what you had just bought. It was a very exciting feeling, which is almost missing in times when people get 10,000 songs on their Ipod ..without knowing 80% of the music they got.
Well, so we are glad that we found a label which wanted to release the CD ( Rilrec), and we also found a label, which is  gonna put out the vinyl-version of the album later the year (Wanda rec.)
Well I think in sectors like Punk or Metal music, vinyl still has a major importance, and I m looking forward to have the vinyl- disc of “what s inside you” in my hands.

You’re a big MANIC STREET PREACHERS fan. Can you remember when and how you got into them? First time you saw them? Last time?

Oh yes , I am 🙂 ….I got into them ..it must have been at the time they had just released ” Generation Terrorists” or a bit earlier . In a local disco in Bochum where they often played ” Motorcycle Emptiness” and the first single ” Motown Junk”. I was immediately attracted to the androgynous voice and the wonderful melodies …Their style, a mixture of early Guns n’ Roses and The Clash was a furious exciting mix ..in addition to that ….obvoiusly : their social awareness :coal miner strikes in wales, that was very familiar to me…
I saw them two times in the nineties …Must have been the “Holy Bible Tour”, and later in 1996 without Richey on “Everything must Go” … I guess.

There’s a lot of punk rock bands in Germany, but not so many glam punk bands. Any bands you think we should check out?

Well, you are right : I  don’t know any bands here which would call their style ..Glam Punk ..I heard this in connection with me the first time when I was still playing with The Revolvers while we were doing a European tour with the  Norwegian output  Trashcan Darlings, and I thought that fit quite good..why not? You need an expression to classifiy your music somehow ..and Glam!! Yes, 2nd District combines a certain androgyny with PunkRock ..so you can call it GlamPunk ..:-) …

More generally, what kind of bands are you listening to these days?

OK here are some bands I listened to last week:

Well, a book about social policies in Germany I got from the public libary in Bochum.

Some shows I saw at the Rebellion  Festival in Blackpool this year, for example : The Damned, Eddie and the Hot Rods, UK Subs …Very impressive to watch those bands in the UK.

How can people get your new album? Have you planned touring to promote it yet?

You can order the new album directly from the mailorder of our record label on www.rilrec.de
and for vinyl on www.wandarecords.de later this year.
You can get in touch with us via Facebook and for more info concerning touring http://www.facebook.com/2nddistrict
thanx a lot for the interview ..and we will see you soon when we come back to France in 2014 in order to promote the album …cheeerz… Stay Beautiful ! 🙂