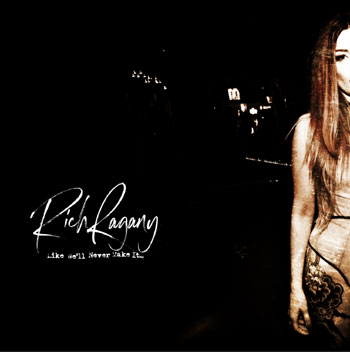 It seems like Rich Ragany (The ROLE MODELS) never stops to write songs! On this first solo album, he got some help from musicians who played with The GLITTERATI, UK SUBS, SCOTT SORRY BAND, etc. The album starts very quietly with “To The Sea”, then slowly moves to some very melodic indie pop with “The World” and “Your Distance.” Names like SOUL ASYLUM or The REPLACEMENTS come to mind. Sometimes the hooks are also in the guitar melodies (“Like We’ll Never Make It”, “Lose With Me”, “Heart’s Souvenir”…), which is something you can find in a band like The CURE for instance. While this might sound like an unexpected influence, that shows us that Rich’s songwriting is not only based on one recipe. Even though melancholy is the main mood of this album, you’ll still find some positive energy when listening to these songs, and it’s quite obvious when listening to the STONES influenced “Scotty Thompson” and “Story Highway.”
“Like We’ll Never Make It” is not your typical rock’n’roll/powerpop album, but it is indeed a great collection of songs standing somewhere in between indie pop and Americana. Laurent C.