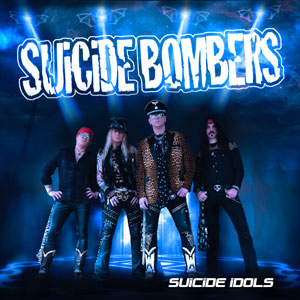 This is the third SUICIDE BOMBERS release already if you don’t count the “Appetite For Explosions” 3 song debut CDR (2012.) As usual, the record opens with a SIGUE SIGUE SPUTNIK kind of intro, just before getting right into the heart of the matter, delivering some high quality hard rock’n’roll with “Suicide Idol”!
“Ready For Tonight” slows the tempo down, with sunny guitar leads and a catchy chorus, a bit like a dirtier POISON, also reminding of Chris Damien Dolls’ old band TRASHCAN DARLINGS (same thing with “Waiting”.) Classic hard rock fans will love “Next World War”, “Generation Kill” (you’ll hear a bit of a “Looks That Kills” tribute in this one), “We Got Tonight”, or “Keep An Eye On You” that has a bit of an early SKID ROW flavour in it. “Never Gonna Change” is a slow one, but it manages to bring an interesting atmosphere, somewhere between melancholy and desperation, while the other slow song of the album “Sex Star Icon” is a good heavy sleazy tune. Just before the outro, “Just One Fuck” ends “Suicide Idols”, leaving a catchy chorus stuck in your head. Something that is really nice with SUICIDE BOMBERS is their will to keep an old-school hard rock sound when too many new bands in this style choose the boring modern sound nowadays. Well, since the world has been goin’ crazy lately, its end might be near, so this is definitely an album you should play at your farewell party! /Laurent C.