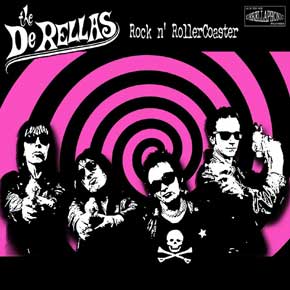 This is the new flashy single the band has been promoting on their recent French tour. “Rock n Rollercoaster” is a cool RAMONES influenced punk song that you can also hear on the band’s new album “Slam! Bam!”, and side B offers us an unreleased crpytic (and mostly instrumental) rock’n’roll song (“Day Of The Dead.”) You’ll also find an old classic of the band that hasn’t been released on vinyl before: “She’s a Pistol.” If you haven’t heard the band before, then this 7″ will give you a right idea about what they’re all about, and if you’re already a fan, then you get something new for your collection…Hey Ho! Let’s PoGo! /Laurent C.