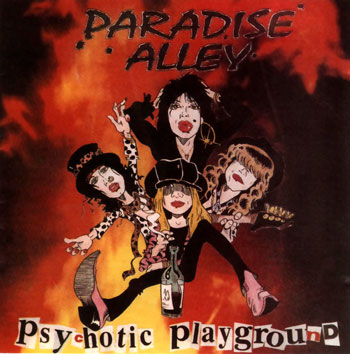 This is the release for the 25th anniversary of “Psychotic Playground” (limited edition picture-dic CD) and I’m ashamed to admit that I wasn’t familiar with PARADISE ALLEY until now, maybe because they were among the bands that had an album out a bit too late… I can’t even count all the great albums that were released in the early/mid 90s that didn’t get the recognition they should have deserved because the style wasn’t very popular anymore. I’ve always been fascinated with the London (Soho) scene from those days though. I used to read articles about these underground glam bands and demos in French magazines, and it looked like there was still a place on earth for these bands although it was more than difficult to find a way to listen to their music. They all looked great though. Cartoonish illustrations, punk fonts and HANOÏ ROCKS/KILL CITY DRAGONS looks, PARADISE ALLEY could only be one of these bands. Opening song “Metropolis Boys” is a perfect mix of early TIGERTAILZ and THROBS. “Baby Don’t Go” is a catchy bubblegum glam single, and at times the band sounds more Sunset Strip than Wardour Street (“Shot Down”, “Walkin’ The Baby”…) This mix of UK and US influences can also be heard in the ballad “Empty Spaces”, that has a bit of DOGS D’AMOUR in it with a US power ballad touch. You’ll also get to hear two demo songs and a good version of HANOÏ ROCKS‘ “Shakes” which should have been released on a HANOÏ tribute album that never saw the light of day. Don’t wait for more and do yourself a favour if you haven’t heard of PARADISE ALLEY yet, and if you have, then this 25th anniversary release was made for you! /Laurent C.