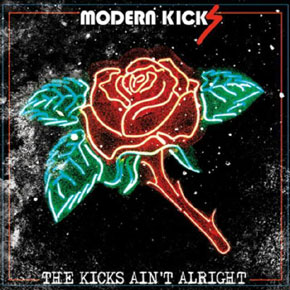 San Francisco’s Bay Area used to be famous for its thrash metal scene in the 80s. Nevertheless, the MODERN KICKS seem to have listened to more HANOÏ ROCKS and CHEAP TRICK than some EXODUS and METALLICA. Following the glam punk power pop steps of The EXPLODING HEARTS, or more recently BITERS, the band offers us 6 very convincing songs here.
Put on your best hat and polka dot scarf on, add some glittery make-up, and get ready to be “Up All Night” rocking to anthems like “Teenage Overdose”, or “Aim High (For Suicide.)”
The JONESES also come to mind when listening to “Hole In My Head”, and the BITERS influence is quite obvious too on “Don’t Let Me Down”, a song built on THIN LIZZY influenced guitars and fine power pop vocal melodies.
The kids are alright, get MODERN KICKS right through the night!/Laurent C.
http://modernkicks.bigcartel.com/
Facebook page