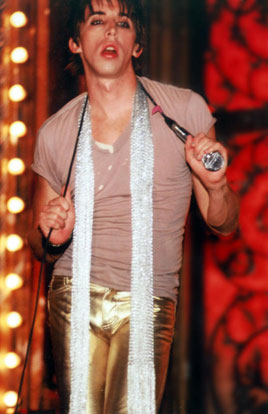 Cowboy. Kevin tells us more… Can you introduce yourself and the band? Why the name “Ghetto Cowboy”?My name Is Kevin Cahoon and I am the lead singer/songwriter for Kevin Cahoon and Ghetto Cowboy. Ghetto Cowboy comes out of my history being from Texas originally and spending a lot of time in the country and having lived in New York for most of my adult life. ‘Urban Cowboy’, of course, had been used, so here we are. I also thought there was something funny about it. Our first song was a punk cover of Anne Murray’s ‘Could I Have This Dance’, so I thought this all made sense.
Are you satisfied with your album “Doll”, when did you start working on it?I am thrilled with it. We started putting it together about two years ago, but due to time constraints, it arrives now. I felt that it was ready to put out in the world. You can’t futz with something forever. you have to let it walk on it’s on feet.You played Hedwig in the “Hedwig & The Angry Inch” play, do you think that it influenced your album? Were you into glam rock before?

I have always loved glam rock. It is so theatrical in it’s conception and has always pushed the boundaries of Pop Culture. ‘Hedwig’ gave me the confidence that this was a way for me to express myself, through fronting a band, writing my songs….Hedwig,what a brilliant text and score. Mind blowing really.

Do you think that living in NYC also had an influence on your writing?

Oh, absolutely. This record has NY in it’s blood. Observations I have made, things I have experienced, this album would have never happened if I didn’t live in NY. I don’t think I could live anywhere else.

Like acting, glam rock has always had the comedy and tragedy elements in itself, do you think that these common points attracted you to acting/singing?

Well, to me it’s all about expression and the ways to do that. I was an actor before I was a musician,but they both allow means to tell stories. One from my own voice, being a musician, and the other as an interpreter, as an actor.

We can feel strong 70s glam influences in “Doll” as well as pop punk ones on the songs “Doll”, “Bitch” or on “Could I Have This Dance”? Here’s a few famous band/movie names belonging to the glam or punk worlds, what do they first bring to your mind?

– Marc Bolan: completely innovating, barrier breaking, planted the seeds, more of the world should know who he is!

– Rocky Horror Picture Show: Awesome. Fun. Had the opportunity to do the revival on Broadway. The film made this form accessible to the masses in the greatest possible way. When people went to the film , it was dangerous, exciting, and everyone had a role. Everyone had a place at the table.

– Ramones: The real deal. Their ability to craft a song was unlike any other. At the end of the day it will still be The Ramones who charged a generation of musicians.

– Ziggy Stardust: Words cannot express. The ultimate. Just listen to the music, that’s all you need to know.

– Sex Pistols: Awesome. There is something very communal about any experience with The Sex Pistols. The energy and community reminds me of Rocky Horror in a way.

– New York Dolls: Electric, alive.Incredible.We certainly wouldn’t be here without them. You must see the new documentary about them.

– Velvet Goldmine:Loved everything about it……those music sequences are incredible and perfect.

How is the NYC glam scene nowadays? What are the best places/clubs to go to? Bands to check out?

Well, I think it’s alive and well. I recommend Lisa Jackson and Girl Friday whenever they are playing. Completely exciting. You’ve got to search, but it’s there. It’s a shame Squeezebox is not around anymore, but my friend Zach Schaeffer is working on a documentary on it. So fingers crossed.

How often do you play there? Have you played outside NY yet?

We play as much as we can, would love to play more. We haven’t ventured outside NY yet, but soon.

What are your projects?

Well, ‘Doll will be in stores in February, finishing my run as The Childcatcher in ‘Chitty Chitty Bang Bang’ on Broadway New Years Eve, and will soon be playing George in ‘The Wedding Singer’ first in Seattle this winter and then Broadway in the spring.