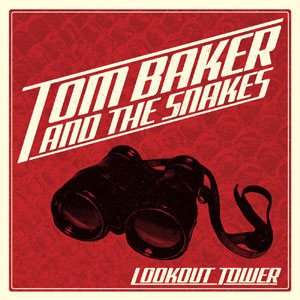 As soon as opening track “Gotta Find Her” starts, you know that you’re going to hear some good old American rock’n’roll on this record. Nevertheless, this is not a revivalist album, you’ll also get a modern powerpop touch on “Run It Out” and its fine guitar melodies, or on the poppy “Doll Eyes.” Songs like “Make It Hurt” or “Waitin’ For Nothing'” are on the edge of hard rock’n’roll, while “High N’ Tight” and “Satisfied Fool” both have some pretty cool STONES influences.
The REPLACEMENTS also seem to be an important band for TOM BAKER and The SNAKES, especially in the song writing and sense of melodies in a song like “Needle In The Red.”
“Maybe Come Back To Me” is very good at staying stuck in your head, just like a CHEAP TRICK song, and “Say Goodbye” closes this album in a melancholic way that makes you think that the band managed to release an album that already sounds like a classic.
“Lookout Tower” is out on March 31st, on Rum Bar Records, make sure you don’t miss it! /Laurent C.