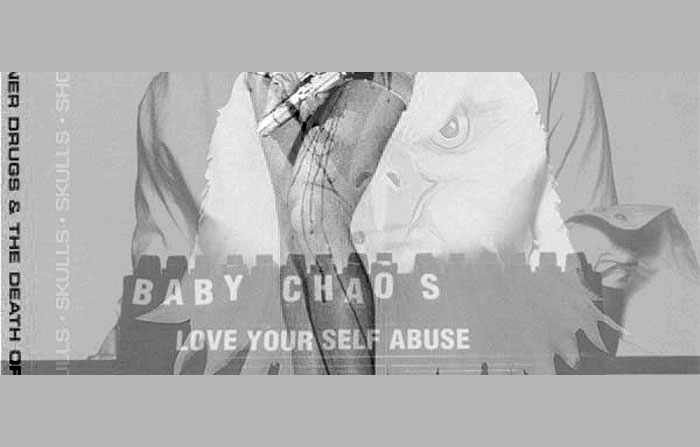 When I first watched BABY CHAOS’ video for “Hello Victim” in 1994, I couldn’t tell if they were grungy pop, glam, indie, alternative, noise/power pop or something else, but I knew I loved it. While many of their contemporaries were experimenting with the fusion of genres like metal and hip-hop, BABY CHAOS mixed completely different ingredients in their own special way. Good news, BABY CHAOS are back with a new album (“Skulls Skulls Skulls Show Me The Glory”), and are still unique! Chris Gordon answered a few questions…

When have you decided to bring BABY CHAOS back to life?

Four or five years ago we were asked by our old friend Ginger Wildheart to reform for a one-off show in Glasgow. He has been such a fantastic ambassador for Baby Chaos and Deckard that we really couldn’t say no. Rehearsals were okay but it was really the show itself which gave us the bump to get writing again, all the old songs felt quite vital and fresh as we performed and I don’t really think any of us expected that. It was as if the intervening years and our own maturity imbued them with a new sense of purpose. Anyway we decided to try writing as none of us wanted to dwell on the past and we thought it may be interesting to see where it went 20 or so years on.

It was comfortable yes, but also it’s just the way it panned out. There was no deadline and no rush and it’s just as well as we all have busy lives and it was only really possible this one way.

Do you think that the album would have sounded pretty much the same if it had been released in 1997 after “Love Your Self Abuse”?

100% no.  Of course we were conscious of the lineage and that had an influence on a few of the songs but in terms of what is possible for production and how I have changed as a songwriter (and lyric writer) I think a 3rd BC album in 1997 would have been very different to this album.

The album is out on French record label Kicking Records, you also appeared on French TV shows in the 90s, and your video for “Hello Victim” was on national TV here. How come things have always been good to you in France? In what other countries did BABY CHAOS do good? Did you tour in the USA?

I don’t know why France took to the music, it was a lovely surprise for us at the time. We had some fans at big TV stations and obviously having that kind of exposure is great for a young band. Perhaps it was the image, we did not look at all typical for a rock band and also the artwork for the first album was from a French photographer, so maybe people like this connection. Yes we toured the USA it was only for a few months and the best gigs were supporting ELASTICA plus a few other festivals, there were some really terrible gigs too but I suppose you have to expect that in such a massive country, it’s like touring the whole of Europe and expecting the same response from Greece to Finland. Every state has its own media and tastes and althought the coasts are fairly enlightened everything inbetween is a lottery.

In the 90s, you weren’t an easy band to label, you were not “Brit pop”, “grunge”, or whatever… Was it a good thing for you, or a bad one? The good thing about it is that your two first albums don’t sound dated as a consequence.

We never deliberately tried to position ourselves anywhere that is for sure. We grew up kind of out the way in Ayrshire then Glasgow which at the time (as now) was a totally mixed bag of musical styles and tastes. I think there was a big development between the 1st and 2nd albums and it would have been interesting if things had taken flight after album 2 to see what a 3rd at that time might have been. Some things happened around the release of the 2nd album that kind of sealed our fate with our record label in the UK. For one Davy got sick and we had to cancel our album tour after only 4 shows (we didn’t even make it out of Scotland, then our A&R guy Nathan left East West and although they stuck with us at the request of Atlantic in America (as they wanted to release the album) we had no-one really fighting our corner at our label anymore. I think the first album sounds quite dated to be honest but not so much the second one. Its rock music though and as such it never really sates in the same way as pop.

BABY CHAOS turned into DECKARD in 1998. Why this change? I remember I bought your CDs as imports, did the band suffer from a lack of promotion?

We had a choice after East West, we could have kept going as BC, we had some offers to do so but I sensed a chage in me and that the next album I wanted to do would be to different to call it a Baby Chaos album. We signed a pretty big deal with REPRISE in LA as Callahan but later had to change the name to Deckard (a small group from Chicago had already sold 300 copies of a single as Callaghan) upon such small facts the fate of a band can be decided. We spent a huge sum recording a good album that the head of the label was talking up to anyone who would listen, then the name change coupled with the rise of Limp Bizkit and there ilk put paid to our momentum. It has since been proved with the rise and rise of Muse that there was a real appetite for the kind of music we were making but record companies are very fickle and in the moment beasts.

The music industry has changed a lot since BABY CHAOS’ first album. How do you feel about it?

I love it, it’s now all about how much time and effort you are willing to put into it. In essence you are now able to do all the promotional things yourself that you used to need a record company for. You can make videos for peanuts and sell music wthout even having to print up a CD, you can take your band photos on an iphone if you so choose (not that we did hahaha)
The rub is that you could be the best band in the world but if you sit on your hands and do nothing no-one will ever know about you and nothing will ever happen for you. Excepting of course those rare individuals of true genius whose talents are so obvious that they will always find a way to be heard.

How do you work as a producer? Do you mostly record bands live?

Quite rarely do I record bands totally live. There are two occasions that I might, the first being if the band are particularly on it and have it all worked out well in advance of meeting me. The second being if there is a quality in their chaos that will get lost by tracking parts individually. Mostly I have found that the music benefits from having the spotlight of recording each part individually. There is often not the luxury of pre-production to work everything out so often you are tinkering with parts or scrapping them entirely, as you go.

What are ther last albums you’ve enjoyed, both musically and productionwise?

Probably my favourite two bands of the last decade are Sigur Ros and TV On The Radio. Although I still like rock music I very rarely listen to it other than a few tracks at time. I saw Laura Marling playing a few weeks ago and had such a huge smile on my face by the end, she is an incredibly talented person. Really outside of my work (which I love) I don’t listen to a lot of music, perhaps if I am on a journey I can catch up with some albums or some old friends of albums but it’s rare. We are on tour in September so I will fill my ipod and take my best headphones with me hahahaha.

I read that you’re playing at Camden Rocks Festival, any European tour planned yet?

We are planning a few shows in France but I have no news of the dates yet, hopefully they will be later this year though.