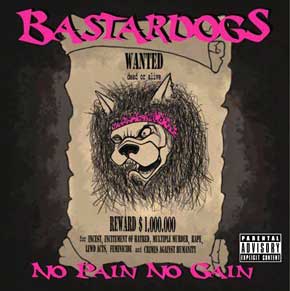 Italian sleazy rockers BASTARDOGS are back with a new album. 10 songs full of raw street metal riffs and hooligan backing vocals. Once again, the name of WRATHCHILD (U.K) comes to mind first, especially on the songs that were already on their previous EP (“Sex Machine”, “NUSU”), but it is mainly because of Bonne’s vocals ; BASTARDOGS don’t sound as glammy/shock rock as WRATHCHILD, they lean more on the sleaze metal side.
These four guys love their heavy metal, and you can definitely hear that on songs like “Last Night”, “Drinkin’ My Brain Off”, “Zombietown” or”Bad Dogs”, sometimes evoking W.A.S.P. (especially the guitars.)
“Edge Of Youth”, a more melodic song, is about CRASH DÏET‘s Dave Lepard (RIP),and that’s not very surprising since the band could easily fit in the Scandinavian 80s metal revival even though they’re Italian!
There’s an old-school flavour in this album that makes it quite enjoyable./Laurent C.