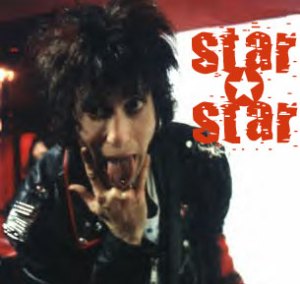 I was more than happy to find a STAR STAR website and to know that Johnnie Holliday still had something to say. If you didn’t know the band when ‘The Love Drag Years’ came out, then it’s never too late and you can start here!…

So, what is the Star Star line-up in 2002?
well there’s Weeds (bass) and me of course. I’m playing more guitar and singing less now ’cause our new guitar player Vice sings alot as well. He’s from Chicago and isn’t really adjusting to being here that well. Then there’s Jak our drummer. He’s from Athens but he doesn’t really adjust to anything very well.

Star Star went through some really bad times, have you ever thought about giving up?
The only thing we thought about was changing the name of the band. It would’ve been harder on us to quit than to continue.

I remember that when “the love drag years” went out, many metal heads thought that it was too punk for them and many punks thought that it was too metal for them (only glamsters were happy 🙂 ), do you think that people are more open-minded now?
Well there is definately more of a blurring of the lines as to what music people identify with now. Generally speaking however I can’t say that I think people are much more open minded today…..and frankly, I don’t believe that people make up their own minds about what they like anymore. It’s done for them by the MTV’s, record labels, etc.

Can you tell us a bit about the new songs? Are they in the same vein than before (musically as well as lyrically)?
Yeah…..you know, you can’t escape yourself. However the chemistry Vice and I have both as guitarists and singers definately gives us alot of new elements, which expand on what we were doing before rather than changing it.

On some Internet auctions, some people would spend a lot of money to get your first release “go go girls in love”, did you know that?
I’m horrible on that album, but if you promise not to play it for anyone I’ll send you a copy.

Do you think that the Internet has changed a lot of things for musicians?
Absolutely, but as time goes by alot of the internet’s power will be taken away from the bands. You already see search engines and directories charging money to give you a higher or preferred listing in their search results, overlooking sites which may be more relevant to a particular search. The internet was a level playing field for everyone but it will move away from that to reflect real life. I could go on and on about this but I don’t want to start ranting……..my ranting gets rave reviews y’know….

Are you still influenced by the “Rocky Horror Picture Show”?
*smile* I never knew I was untill the press started saying so. It’s unavoidable when something has been a big part of your life. We had fantastic nights at the Waverly and later the 8th Street Cinema (theaters in New York City where “Rocky” played) that defintely left lasting impressions.

What bands do you like nowadays?
Well I’m back to liking the stuff Bowie is doing again. It’s no Ziggy or Diamond Dogs of course but y’know. I saw Smashing Pumpkins in Rotterdam and became a fan. I liked some stuff that Babylon Zoo did and I do like some of the Marylin Manson stuff. It’s been a while since I heard an album that I can listen to while staring at the cover for hours and hours…..and…..if you must pry……I like songs with girls in the video……I’m a victim.

You live in Athens (Greece) now, what are the advantages/drawbacks compared to the United States?
The only thing that makes any difference for us is that you can smoke freely here. The drawback is that “Camel Wides” aren’t available here.

Do you know when you’ll have a new album out?
A five song EP with three new songs and some live recordings will be out late this year. We start mixing in April and if it goes really well there may be more than just two live songs on it…..then it wouldn’t be an EP right?…..what would it be?……hmmmm

Anything else to add?
Thanks a lot for your time.