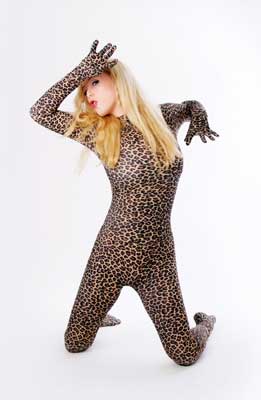 England’s new candy pop sensation KIRIA is bringing back sexy pop punk with bubblegum hooks and attitude in the UK. She tells us about her debut album “One”, her songwriting and influences…. And you’d better believe her when she sings “I’m not one of those fussy, fussy girls”!

Can you introduce yourself? What have you released so far?

I’m Kiria. Pronounced Kih-re-ah. I landed on this planet to make some serious changes to the grey, tired world of Pop that this current age has tried to suppress us all with. I’m going to make you all so happy you will wear tight pink leopard print lycra and kiss each other all day long until you drown in your own happiness….
So far, I have released one track, called Live Sex On Stage, that was an expression of anger toward the current state of England’s pop charts, and from there on, the only way is up!

Tell us a bit about your first album “One”, where did you record it? Koochie Coo is your own label. Do you think that it’s better to do things by yourself in this Internet age? Will the album be distributed in Europe and America?

My first album, “One”, seemed to take forever to record and finish! I produced it throughout a difficult, insecure 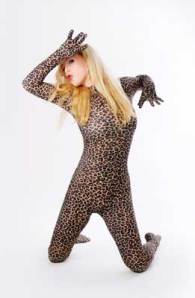 stage of growing up, so this album and the writing on it is a huge reflection of that strange, experimental insecure time….I’m so happy to have put it down, that the next ones are coming far more easily with my newfound confidence, and I’m getting more up to date with recently written songs, whereas some of those on “One” I feel I have grown out of already!
This album will be available across the world digitally, and in hard copy from my website. I much rather people ask for a copy so that they can have the lyrics, photos and artwork, which have had as much, if not more thought and effort put into them as the recordings!

I recorded it at a North West London studio, at the time named “Panic” Studios – very apt for the teenage crisis I endured whilst writing the lyrics!

I think doing things yourself is a great idea, if you want to remain in control of your own future and creative output, but it’s not an easy way forward! Lack of funds, time and power to get things looking and sounding great is not a weekend job, but I strongly believe that if you love what you do, and you keep yourself focused on any mission you embark on, you will succeed in fulfilling your dreams, but not without much hard work, many tears and a lot of patience!

You have many sweet bubblegum pop melodies in your songs. How do you usually write a song? Do you start writing the music or do you have an idea about the vocal melody first and then write the music?

I only write a song when a melody or lyric has come to me and not gone away for some time. I used to dream the melodies/songs when I was sleeping, and jump up and record them straight away in case I forgot them, but now I am more confident, I figure if and when they are good enough to use, I wont be able to forget them, as you never do a great melody, so I record them when the time feels good for me. Never in any particular order, but I write all my lyrics on train journeys. My favourite if I have the cash is jump on the Eurostar and head for Paris and back….

Do you have a steady band or do you work with different musicians as a backing band?

I don’t have a steady band. Not for want of trying, but finding a group of people who can all grow together and get on Musically and personally is not at all easy, especially when you are all growing in different areas and at different rates of speed, as all animals do. For this reason I don’t get too comfortable unless something feels right, I keep moving and growing, and in that process, it is just a natural progression that you win and you lose some!

Your video “Live Sex On Stage” features Mike Strutter, how did that happen?

That happened very naturally. Paul Kaye (Mike Strutter) and I are cosmically linked Punk twins. We don’t need to make a concerted effort to communicate – we just know, which is amazing. He has made me feel like so much less of an alien than I always believed I was growing up! When I wrote that song, he immediately sprung to mind to be my partner in crime for the song/video. I called him up, he came to a short rehearsal, which we filmed and edited in a day, he slapped down some vocals alongside mine, and the rest is history! Completely organic from start to finish, the way the most fun stuff always is….

We can find different music styles on your album. Do you think that a good song can work in any kind of style?

I believe so! I get so tired of groups and niches and journalists and people who believe in the general rule that everything should fit in neat boxes. We only have one life, so we should fill it with as many things as we feel like exploring! The day I can’t experiment with my creativity and do what I like with my own feelings or Music is the day I’ll throw my stilettos on the fire….

Here are some girl singers, what comes to your mind when you hear their name?

Strong and beautiful, but I do not wish to be in a musical project with her again!

Nothing! It’s not about the Music….

Extremely adaptable. Pretty, made out of plastic, smiles a lot and doesn’t mind being played with – a bit like a Barbie doll!

What are your favourite Morrissey songs?

Every Day Is like Sunday, The More you Ignore Me, The Closer I get and I’m Throwing My Arms around Paris!

Albums you couldn’t live without?

This week?! I have so many, they keep changing…. But, definitely Aladdin Sane by Bowie, Blank Generation by Richard Hell and The Voidoids, London Calling by the Clash, Marquee Moon by Television, Never Mind The Bollocks by the Pistols and (this week!) The Neurotic Outsiders album…. Is it true that you love boxing!? YES! I’ve been bullied in the past, and these days I like to know I can hold my own in this scary world….there ’aint no fucker gonna bring me down without a fight!

I guess you’re going to be busy promoting the new album. Any tour planned yet?

Unfortunately not yet! I am very busy in London, and so far gigs are only planned here, but I want to tour the world, I love travelling, and I just can’t wait to play in some different cities/countries, so it’s the first thing I want to get doing so watch this space!