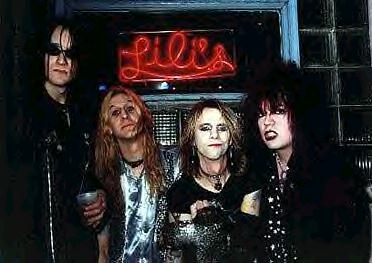 The TRASH BRATS really succeed in mixing the punk rock authenticity and state of mind with the glam image. These guys are not here to compromise, rock’n’roll is in their hearts and they will keep the flame burning, come hell or high water ! Ricky Rat talks…

Can you give us a summary of the TRASH BRATS’ history ?
We have been together since summer of 1987. Me, Brian and Toni have been here the whole time and we had about 5 or so drummers til Craig joined in fall on 1993. We have never had any major deals etc, just been going and going surviving in the “underground” and dealing with mostly all small indie labels, distro etc.  We keep playing the kind of music we want not worrying about trends etc. We’re the Trash Brats, we sound like the Trash Brats, we look like the Trash Brats. We’re us.

I’ve read that you played for 24 hours in Detroit !! Can you tell us more ?
Yes we did a “24 hour show” that was a benefit for this art program here in Detroit that helps out inner city kids. We didn’t actually play the WHOLE 24 hours but did play a hell of a lot both regular electric sets and acoustic and also some help from some of our other friends in Detroit bands etc.

All of us were up the whole time with no naps, etc…so when not playing we were drinking, hangin’ out with friends/fans, etc. It was a really great time despite the awful draggyness of being up soo long. Our last sets the second evening (we played from midnight on a friday to midnight on saturday..!) we actually maybe some of the best ones of the whole show!! It was all captured on video and maybe a “shortened Version” will be released in the future.

I suppose that the audience must be of various kinds at a TRASH BRATS show, do all these people always coexist peacefully ?
Yes ,for the most part our “crowd” does get along. even though our shows are very much uptempo, loud, rockin’, etc we have managed to not get too many macho asshole types metal/punk wise over the years. Some shows are of course more crazier then others but for the most part no one gets hurt or gets onto fights etc. The early days for us here in Detroit were very rough..lotsa shit from skinheads and all the “hardcore punks” as well as the metalheads. For awhile pretty much all the crowds hated us. So, we pretty much developed our own crowd and following which doesn’t fit into any other catagory and does include all sorts of people.

Nowadays, there are many divisions in the punk scene (skate-rock, emo, crust,etc.) Are you interested in all these genres that make this scene so varied ?
Don’t you think that most of the time, the problems existing between these divisions are just stupid because they are often due to ways of life (those who drink, those who don’t, those who are into politics, those who aren’t…) which is in contradiction with the “live the way you want” punk philosophy ?
Yes, very stupid. To us, “punk rock” was always about doing what ya want, dressing how ya want etc. We found out early on how closed-minded alot of these so called “punks” really can be. Its like we were too punk etc, for the metal scene and too glam or whatever for the punks. And yeah, these days the scenes are more chopped up then ever. Its all rock & roll really, if ya don’t like certain bands or styles etc. just don’t go to the shows or buy the records etc. Support the stuff ya dig and try to stay positive about things. Why waste time putting someone else’s taste down etc?? Do your own thing and worry about yourself first before ya go tryin’ to change the world or something.

What bands do you like to play with in the US ? Any anecdote ?
Texas Terri & the Stiff ones are always great and very fun to play with, as are the Teenage Frames, Jeff Dahl, Sloppy Seconds, Kevin K, Candy Snatchers. We had a really killer time doing some shows with Joan Jett & the Blackhearts last year and on tour in 96. Thommy Price and the rest of the blackhearts loved to go out after the shows and go drinkin’ and do more jamming at local bars etc. We really enjoyed playing with them and getting to meet Joan after diggin’ her music for so many years.

Have you already played in Europe ?
Just one mini-tour of Germany in 1996. But me and Toni (brats’ bass player) have done tours of Japan and Germany, Italy as part of Kevin K’s band. There’s some talk about maybe a TRASH BRATS/KEVIN K double bill-tour later this year in Germany, France, Italy etc.

What would be your five favourite records for the last three months ?
Valley Of The Dolls-Generation X,  Nights Are So Long-Michael Monroe, Unhappy Hour-the Beat Angels,  Muscle Of Love-Alice Cooper Band, Being There-Wilco.

In 1997, you appeared on a PETA benefit, are you interested in animal rights ? Do you often appear on benefit records/tapes ?
We try not to think of ourselves as a “Poltical” band but yeah, that seemed like a good cause to be a part of. I am a vegatarian and Brian doesn’t eat much meat either. I have been away from meat since 1997 and its been working great for me, but its not something I would push on people. But yeah, I am all for animal’s rights very much. We will appear on a benefit comp if we feel its a worthwile cause etc..

Here’s a difficult one for you : choose (and tell us why) between : AC/DC and KISS, The SEX PISTOLS and The CLASH, MOTLEY CRUE and TWISTED SISTER, SOCIAL DISTORTION and BACKYARD BABIES…
Good question! And yes, very hard to answer for most of them… Kiss over AD/DC even though BOTH are really great..at least all their old stuff. I go with Kiss as that was my first favorite band when I was a kid and they pretty much got me into playing rock & roll, so they hold a special place in my heart. But I love Bon Scott era AC/DC just about as much!

SEX PISTOLS over the CLASH although AGAIN I think BOTH are really great and I love them both. But, I just LOVE The Pistols overall approach, lyrics, SOUND and how much shit they fucked up in such a short amount of time. Just saw the movie “Filth & the Fury”-which was great-and have been back on a Pistols kick again. I love a lot of the Clash stuff but they lose me at times and get a bit artsy-fartsy etc. But again they have so many great songs, a great sound etc….

yet another hard decision…I guess TWISTED SISTER over MOTLEY CRUE although I love Too Fast For love which was the album for Motley Crue, as they had their own sound then and no one was sounding/looking like that then. But over all, I think Twisted Sister had more good songs over the years and I loved their so over the top look-attitude and a lot of the lyrics, etc. They were even too freaky for most metal heads and punks, unlike motley crue who were a bit more rocker-normal and most people could relate to all the songs about girls etc.

no question on this one- SOCIAL DISTORTION for sure. Mommy’s Little Monster is still such a great, fun classic Punk Rock album. And pretty much everything they have done has been pretty cool or at least tolerable. I don’t like what I have heard from Backyard Babies at all except maybe one or two songs. The singer sounds like a cross between Social Distortion and like Metallica or something. I just don’t think the songs are that good. I saw ’em live once too and they were pretty boring.

Your projects, hopes, dreams ?
Our new 7″ ROCKET TO HEAVEN b/w 3RD GENERATION NATION will be out in a month or so on LAWLESS records. Our new album (no title yet) will be out on STORM records in late fall. We’re finishing it up this upcoming month. Maybe more touring in the fall after the album comes out, and of course we are always looking for better tours, shows, labels to work with etc. There will be a lot of songs coming out soon on various comps(the firstful of rock series..we’re on vol 5 that just came out)(A tribute to the Flamin Groovies on Safety Pin records from Spain.) Thanks to everyone for the very great support over the years..we got a long way to go yet! Please keep checkin ‘out our website for all the latest & greatest TRASH BRATS news, info, tour dates, etc. Keep supporting the REAL rock & roll bands, zines, labels, etc.