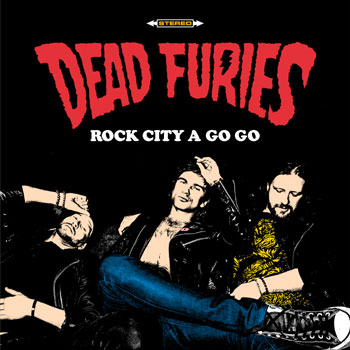 Sweden has been influencing many bands these last years, and DEAD FURIES are no exception since their high energy rock’n’roll could have been produced in Scandinavia, although they are from Estonia. A lot of energy and fine melodies are the right ingredients for the good recipe in this style, and songs like “Mystery Train” and “Take a Chance on Me” are good illustrations of this. When DEAD FURIES hit harder, they bring early TURBONEGRO and The MISFITS to mind with “Feast Of The Vampyr” and “Working Class Zero”, or even MOTÖRHEAD (“Black Jeans/White Boots”, “No Reason To Die”.)
At times, DEAD FURIES get more influenced by the US than Sweden, and they offer us songs like “Aloha Baby”, “Surfin’ Craze”, or “Rock City A Go Go”, which fit them quite well too. The album is out on February 16, give it a chance! /Laurent C.