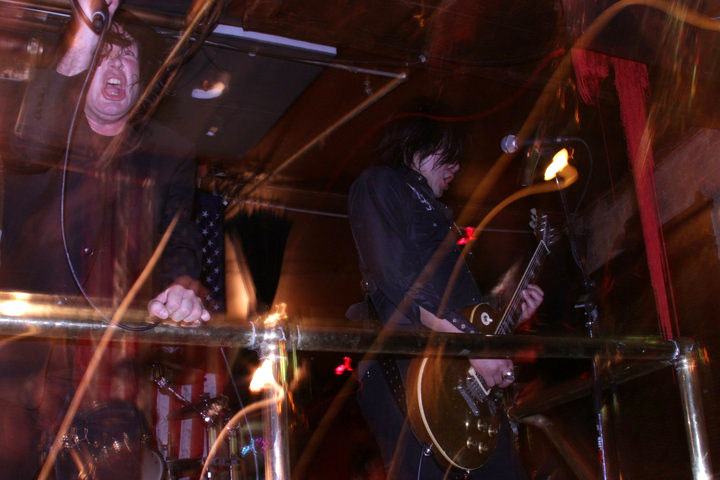 After reviewing a few of their releases, it was time to ask BORN LOOSE a few questions.
Drummer Eric Robel tells us almost everything…

Can you give us a bit of history, when did BORN LOOSE start?

It started back in February of 2009. Larry had been living in NYC for a bit by then and had recently suffered the loss of his good friend and band mate
Matthew Odietus of the Candy Snatchers, so it ended his band. Being from VA beach with lots of playing history here in NYC, Larry’s move here was a no-brainer.
Suke, having history of playing with The Candy Snatchers years earlier, and playing with Mike Dee (our original bass player) and myself briefly in our band Nova Express made the connection for Larry when they both wanted to form Born Loose. It was like all of a sudden we all met in a hourly rehearsal studio one day and played together as if we were in the same band for years. It was very comfortable and easy- we pumped out three songs in two hours, two of them were to become the A and B sides of our first single “Congratugoddamnlations.” To this day, we pretty much rehearse in the same efficient way, there are times that we pull out two or three in one day, only to have them finalized by the next week or two. The writing styles of Suke and Larry complement each other nicely.

Tell us about your new 10″ “Death From Above”, which is out on Hound Gawd! Records. You already have a few releases out on this record label. How did it first happen?

It may be some of our best work to date. In my eyes it combines perfectly all of the things that are best represented by our writing; Garage, 77′ punk, hard rock and R-n-R. All of those styles can be heard in some form or another on all of our work, but somehow the “Death” EP ties them together in a more pure and frantic way. This is music to Drive, Fuck and Kill to, in that order.

I saw that you played some German dates last year. Was it the first time in Europe for the band? … and do you tour a lot in the US?

No, we actually did a nice little tour of Germany the previous year revolving around the Get Lost Fest in Hamburg. That is when we met Oliver from Hound Gawd! Records- great guy, and a rare character in the indy record industry: someone who keeps his promises and delivers on time. That tour was really good for us, I barely remember it.
Another thing that made it successful was working with Michael from Wild Wax Shows- another stand up guy who we all now consider a life-long dear friend.

As far as touring the US- our attitude is YES, but we know there is more enthusiasm in Europe for our kind of music, therefore we haven’t really done substantial
touring here. From 2009 to 2014 we regularly hit some of the east coast cities where we had great shows, some of our best for sure- but we haven’t ventured too far off the right coast. There is talk of a mid-west tour in the Spring actually, and we may record our new album there as well.

What are the best places for rock’n’roll in NY these days?

Larry’s apartment. There’s still some great places around, the main staples linger around for a few years and the lesser footnotes pop up and down more often.
In Manhattan there is Otto’s Shrunken Head, Clockwork, Bowery Electric, International Bar etc… As everyone in the world knows, things move fast around here- no longer are the long standing live venues of CBGB or Continental, nor bars like Motor City or Mars Bar. In Brooklyn they are going through the same thing we here in Manhattan have recently, a great live venue like The Grand Victory pops up for a few years, then closes. That place was Born Loose‘s back yard, we played most of our shows there in the beginning, and right up to their last night of business pretty much- great people over there, we hope they open something else soon. But in general there are some cool places in Brooklyn: Don Pedros, Acheron and now the newly opened Gold Sounds. But if you ask me again in 6 months, the list may change- welcome to NYC! Pay attention!

NYC has always been very inspiring for artists and bands. Do you think that you would play the same music if you were living in California, or elsewhere?

Great question. There is the assumption that there is no intensity on the left coast. Not true, but there might be a more laze-fare attitude on pushing the envelope. There are exceptions to every rule, but many over there may have other things to think about vs the compressed, pushed to the limit, no-sun shine,cold as shit-rat-infested NY people. If we lived in California, we would probably write and play even more intensively- just to keep things “right” in our own heads.
It should be noted that Larry also plays in a band based in LA once in a while, The Ringleaders.

You like your rock’n’roll wild and fast. Any other American bands you feel close to these days?

No. There is nobody like Larry on this earth. We provide the backdrop and soundtrack to the insanity of his ferocious performance.

5 records that are important to you.

I would like to have the other guys jump in on this: Hey Larry, try if you can to take the hundreds of records that are vital to you to come up with five.

Is there any chance Donald Trump will call you to play his presidential inauguration?

I sure as hell hope so, we might get paid a shit load! but wait, I did hear he doesn’t like to pay his debts so we actually might not get paid at all! SHIT!
I might do it for free just to sneak a pussy-grab on Melania or Ivanka.

What’s next for BORN LOOSE?

Full length album by late 2017, new 7″ sooner, mini-tour in the Mid-west and Germany in Aug/Sept. And…practice tonight! who’s turn is it for pops?