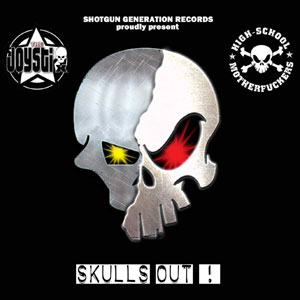 These two bands have been friends for quite some time now, so it isn’t very surprising to see them share this CD together. The JOYSTIX still know how to mix their old-school punk rock’n’roll influences to more modern, and melodic ones, and when they sing “I Don’t Believe In RnR (Anymore)”, it’s hard to believe them, at least when it comes to the music itself since it’s a real cool rock’n’roll song, with lots of glam punk energy. “Outta My Head” sounds more like The WILDHEARTS, with heavy guitar riffs and melodic backing vocals, and “Sunshine Girl” has a great poppy/glammy chorus, probably my new favourite JOYSTIX song!
It’s good to hear French hard rock’n’rollers HIGH-SCHOOL MOTHERFUCKERS on record again, and even better to see that they sound better than ever with songs like “Motherfucker Go” or “Don’t Care”, their sound naturally evolved towards glam punk/rock’n’roll (sometimes reminding me a bit of SPACE AGE PLAYBOYS), and we sure won’t complain about that! As fans of old-school hard rock and ’77 punk, a song like “Ride Into The Blue” shows us that the HSMF can also appeal to MOTÖRHEAD fans for instance. Both bands are on tour this month in France and Hungary, don’t miss them!/Laurent C.