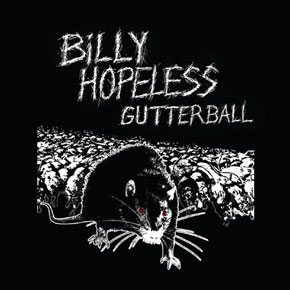 BILLY HOPELESS started The BONITOS after The BLACK HALOS‘ split. Unfortunately, the band didn’t go as far ar it should have, but our man in black is not ready to give up, and the songs in his head always need to be incarnated in some way or another. “Gutterball” is Billy’s first solo single, and his old partner Rich Jones (now in the MICHAEL MONROE band) helped him out to record this wild punk rock’n’roll tune. Imagine a mix of The STOOGES, BLACK HALOS, and short-lived glam punk band GUNFIRE 76, the kind of rock’n’roll that is getting too rare nowadays, in Billy’s own words: “I just need to hear some real raw animal punk rock and roll as there’s too many animals that have gotten tamed and too many tame ones trying to act like animals.”
Bones Brigade and Charles Manson on The HIP PRIESTS cover, the British gang continue their Turbo rawk’n’roll crusade with “Wired, Amped, Skulled”, bringing some of the best Scandinavian punk’n’roll to mind. Sweaty and dirty, just how we like it! This split 7″ is out on Little T and A Records. /Laurent C.