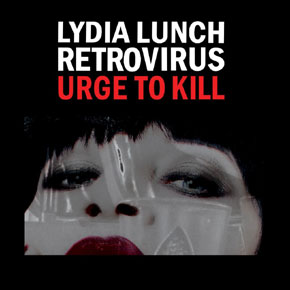 LYDIA LUNCH always has something cooking. I saw her a few month ago with A KALEIDOSCOPE OF NOTHINGNESS for her “Sick With Desire” spoken words/sonic and visual performance, some dark urban poetry with a collage/slogan setting and a great dancer girl. I didn’t know what to expect, and it was really good. On this new album, LYDIA LUNCH joined forces with guitarist Weasel Walter (FLYING LUTTENBACHERS), bassist Tim Dahl (CHILD ABUSE) and drummer Bob Bert (SONIC YOUTH, PUSSY GALORE) in order to record 9 songs live in the studio. The band already worked together under the name RETROVIRUS before when they toured in the US in 2012, and then released the 2013 album “Retrovirus” recorded live in New York.
“Snakepit Breakdown” opens in a noisy, repetitive, hypnotic way just before calming the atmosphere down in a dark, and almost disturbing way with “Some Boys”, a song of the 1984 EP “In Limbo.” You’ll also find LYDIA‘s excellent ROWLAND S. HOWARD cover of “Still Burning” that was on this EP as well, and a tremendous, very organic interpretation of SUICIDE‘s “Frankie Teardrop.”
“Dead Me You Beside”, “Three Kings”, and “Tied and Twist” display the more experimental side of RETROVIRUS, with memerizing groovy bass and free jazz guitar, while “Fields Of Fire” get us back to NYC punk roots, and “Three Kings” puts an end to this record, bringing back the Berlin no wave of “Honeymoon In Red” to mind, leaving you breathless, your mind wandering somewhere in between the dark scents of the past, contemporary violence and lust for life. “Urge To Kill” will make you feel alive. /Laurent C.