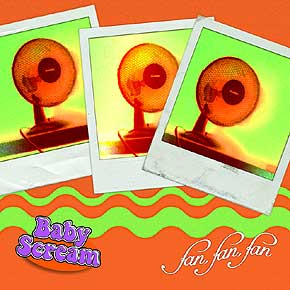 BABY SCREAM (Juan Pablo Mazzola) is back with two (!) albums, “Fan, Fan, Fan” and “The Worst Of…”
90s tainted power pop and 60s/70s rock are still the man’s main influences. You’ll find 12 new songs in “Fan, Fan, Fan”, lots of sweet melodies (“Back To Douche”, “Just For A While”), some sunny tracks with disillusionned lyrics (“Loner”, “Captain Hook”, “The Girl Next Door”), touch of cabaret rock (“Cheap Perfume”, “Blue In Berlin”), and some BOWIE-esque ballads (“A Human Being On Mars”, “Haters Will Hate.”)
“The Worst Of…” is a 27 song CD (22 originals and 5 covers), definitely too much for someone like me who enjoys the vinyl format for records, but well, these were taken out of 200 songs!… Stand out songs include “As Long As It Hurts (I’m Fine)” and “Shooting Stars”, two songs with a DINOSAUR JR feel as well as “In A Picture” and its big SUEDE influence.
The covers include the ones BABY SCREAM recorded for an Argentinian record label that released some TV shows/cartoons/movies based compilations, and I have to admit that the “Friends” theme actually fits BABY SCREAM very well!
Fans of The JAYHAWKS, Americana and The BEATLES will enjoy this new albums for sure./Laurent C.