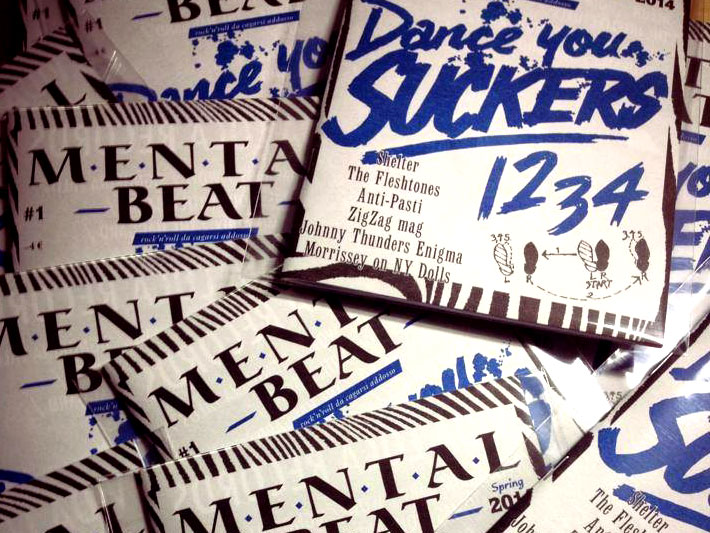 Band interviews can be pretty boring when all they can talk about is how their new album is better than their previous one. On the other hand, people who play in bands and who have other rock’n’roll activities are rarely boring. Miguel Basetta tells us about running a printed ‘zine in 2014, his love for punk rock and Morrissey, and gives us the latest news about his band TEMPORAL SLUTS.

When did you first get into rock’n’roll/punk, etc.? First records you bought? First show you attended? First rock shirt you wore?

When I was 7 or 8 years old, I asked my mother for a d.i.y Labyrinth mardi gras masquerade costume, so I dressed up just like David Bowie in that movie: cloak, walking stick and big hair: the wig was taken from a Jem and the Holograms’ costume! I always liked rock’n’roll iconography and rock’n’roll weirdness.

I think that the first rock tape I got was Europe, The Final Countdown, then Iron Maiden, Live After Death, Guns n’ Roses, Use Your Illusion II (Christmas gift from my aunt!) and the Ramones, Loco Live. First time I saw the Ramones live on t.v, they blew me away, and my life changed for good.

Of course, the first rock t-shirts I wore were a d.i.y Guns N’ Roses’ one and a Ramones’ one, bought in a shop called Transex.

Why have you decided to start a paper fanzine? Have you thought about doing it online, or not at all?

More than ten years go, I used to do a paper fanzine called Oriental Beat. It was about my so called punk rock life: going to shows, buying records and everyday shit. It had no pictures, but tons of words only. Last issue was out around 2006.

A few years later, I started Mental Beat (yes, I love Hanoi Rocks!) because I still like d.i.y publishing and going to shows, buying records and everyday shit. But Mental Beat is totally different from Oriental Beat. First of all, I think that artwork is as meaningful as words. I couldn’t do Mental Beat without Alessandro Cavallini, my right hand man: he’s a professional graphic designer and he’s not as involved in punk rock as I am, so he has a different perspective on doing paper zines.

I’m not interested in doing a webzine because it wouldn’t be as funny as doing a paper one. A lot of people start webzines because it is free and it is easier, but I think that everything should have a price. And punk rock has always been about wasting money!

You probably read quite a few paper ‘zines through the years, what are (or were) some of your favourite ones?

When I started Oriental Beat I was influenced by Maximum R&R, Hitlist and Sonic Iguana but, most of all, I used to read a lot of Italian fanzines: Gabba Gabba Hey (punk rock, garage punk, pop punk…), abBestia (the guy doing it was in a punk rock band called Fichissimi and he was in love with bands like Jawbreaker and J Church), Nessuno Schema (one of the best Italian zines ever) just to name a few.

Nowadays I read pretty everything. Sometimes I grab a copy of Razorcake or Pork and I’ve just written some stuff for MondoCW (a zine done by the guys from One Chord Wonder Records here in Italy) and City Slang (a hi-energy rock’n’roll zine done by my old bandmate Dario in Seattle. He moved to the U.S a few years ago).

How many copies do you usually print? Why have you decided to use both Italian and English languages in the ‘zine?

I print 200 copies, risographed. Mental Beat #0 is sold out and I have a few copies left of issue number 1. I decided to use both Italian and English for no particular reason. If I interview the Fleshtones, there is no need to translate it: I just write it down. But I must admit it’s harder to write my thoughts and rants in English so, in that case, I go with some Italian words.

Tell us about the ‘zine making process, from choosing what/who will be featured to the day you get the ‘zine from the printers. Mental Beat is not a fanzine in which you’ll find promotional interviews or typical promo reviews, is it self-financed?

Mental Beat is a fanzine, so it is about what I love. When I started doing it, I was totally in love with Prima Donna, Biters and Giuda and I’m still in love with these bands, so I keep writing about them: you’ll find them in every Mental Beat issue, promised!

I like collecting rare stuff, like the New York Dolls feature written by Morrissey when he was a teenager, or the Johnny Thunders crossword puzzle I took from Jeff Dahl’s Sonic Iguana magazine. Mental Beat #1 cover is taken from a Hanoi Rocks tour book!

I like to get good writers involved and all Mental Beat contributors are both good writers and friends of mine: I ask them to write about what they love most.

But the most important thing is that I like doing magazines, that’s my everyday job too, so I know well that a kick-ass artwork is everything. Once again, Alessandro’s graphic work is essential. As far as money is concerned, Mental Beat is self-financed, the print process doesn’t cost that much and, as I’ve already said, punk rock is always about wasting money!

You have joined TEMPORAL SLUTS on guitar. How did that happen? What is the band up to these days? Did you play in other bands before?

Temporal Sluts have been around for more than 20 years and I just joined them one year ago. I used to listen to them when I was a teenager, I had some of their singles recorded on a tape and now I’m playing with them! In the past they toured France and recorded a split with a French band, the T.V Killers, covering each other…

I started playing guitar in an alternative rock band during my high-school years and in 1999 I ended up playing with Willy Wonkas, a punk rock band influenced by early Queers and Dwarves: we did a bunch of records, split singles with the Automatics and the B-Sides from the U.S and one with the Go Faster Nuns from Germany… Since then, I’ve been playing on and off: Teenage Schizoids, the Directors, the Sha-Rellies and now Temporal Sluts: we just recorded some new songs and a full length will be out soon.

Italy is on the international glam map right now with GIUDA. Are you suprised about it? Any other Italian bands people should check out?

No, I’m not surprised because Giuda are one of the best rock’n’roll bands around, they are quite unique. I was at their second show ever and it was a blast. That’s the way it works: you listen to a Giuda song for the first time and you sing along with them right away. They take care of melodies, refrains, riffs, hooks and… image: cover artworks, logos, badges and patches, denim uniforms, the way they take the stage. And now they have an entire army following them. I think that Giuda are just like Turbonegro: European outsiders taking over the world.

I love a lot of bands from my country: the Peawees, the Leeches, the Manges, Midnight Kings, Armed Venus and… Derelitti. Everyone into sleazy rock’n’roll should check Derelitti, they are brilliant.

You seem to be travelling a lot to see bands. What were your last trips?

Travelling all around Europe to see punk rock bands is a good chance to visit cities otherwise I’d never go to. For example, a few years ago my girlfriend and I ended up in Ris-Orangis for a Biters show… There was nothing to see, but – surprise! – the venue, Le Plan, is in rue Rory Gallagher! Or when we ended up in Essen, Deutschland, for a Prima Donna gig: that’s metalhead capital city! I didn’t know that Kreator are from there.

Last trips we did were Zurich to see the Supersuckers (cause their latest European tour didn’t touch Italy) and Lausanne for Morrissey, but he cancelled the show!

Since you’re talking about it, you’re a MORRISSEY fan. When and how did you get into his music?

First time I got in touch with the Smiths and Morrissey was through abBestia, one of the fanzines I used to read when I was a teenager: there was the Does the body rule the mind or does the mind rule the body? quote on the back cover.

Then a friend of mine who was into goth music gave me a tape of Rank and I started listen to the Smiths, but I’ve never been a huge fan untill I saw Morrissey playing live: he blew me away, just like the Ramones. It was a show at Villa Arconati in Bollate, close to Milan, and he played Human Being, my favourite New York Dolls’ song! Morrissey solo is something totally different from the Smiths.

Some albums you couldn’t live without:

Ramones, Loco Live: as I’ve already said, the first time I saw them it was on tv, and it was a show from the Loco Live tour. I love a lot of bands: Hanoi Rocks, the Dictators, Guns n’ Roses, Dead Boys, New York Dolls, the Heartbreakers, D-Generation, the Cramps, the Boys… And talking about most recent bands, the Crazy Squeeze, Prima Donna, Biters, Giuda… But the Ramones changed my life. When in doubt: listen to the Ramones.

A biography of Ritmo Tribale, an Italian rock band born in the 80s and pretty well-known in the 90s. Their singer, Edda, is an interesting guy: half hare-krishna, half junky. And I’ve just finished a semi-fiction novel about an 80s goth band in Pavia, a small city close to Milan. Pretty funny reading, hey suburbia!

Filmage, the story of Descendents/All.

What are your next projects with the ‘zine, band… ?

In the next months I will put out four photo issues of Mental Beat. It will feature punk rock pictures shot by friends of mine. We’ll start with Ale Formenti, he was Willy Wonkas’ singer and he’s a talented photographer.

As already told, Temporal Sluts just recorded a bunch of new songs for a seven inch single and a full length; we are planning some shows outside Italy for 2015. Meanwhile, next weekend we’ll be the opening band for the Saints here in Milan and Bologna.

Last but not least, I’m working hard on a book about an Italian punk rock band, the most important one to me, but my wettest dream is writing a biography of the Escovedo family: Pete Escovedo, Coke Escovedo, Sheila E., Mario Escovedo (the Dragons), Javier Escovedo (the Zeros), Alejandro Escovedo (the Nuns/Rank&File/True Believers)…
Gabba gabba hey! 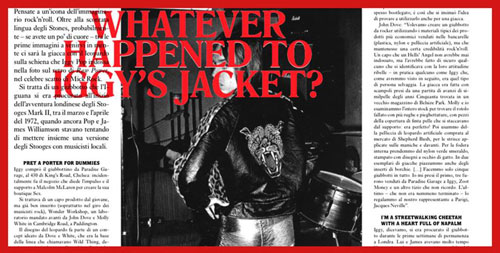