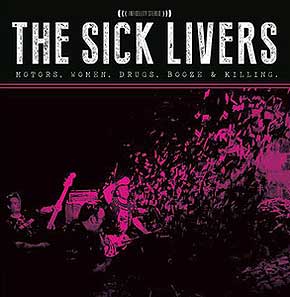 he name of the band and the album title both tell us that these guys are probably not the new straight-edge hardcore sensation!… Hailing from South Wales, The SICK LIVERS like to sing about drugs in a punky catchy way (“Gimme The Drugs”, “Cocaine Jeans”) with the help of loud sleazy rock’n’roll guitars, and deliver some dirty non-PC fun in 8 songs.
“Get Ready”, “Seven Year Itch” or “Sick Liver” will get punk rock’n’rollers singalong quite easily at the band’s gigs, and TURBONEGRO fans will love the guitar solos a tune like “Blood On Your Halo”!
The SICK LIVERS probably got too much ROSE TATTOO, AC/DC, or NASHVILLE PUSSY in their blood, but we won’t complain about that! “Bummed To Death” will leave you want more…
I was talking about hardcore, well the vocals actually sometimes sound close to some in the early 80s hardcore bands, you can feel some high energy running in the these guys ‘veins, and it wouldn’t surprise me to see them selling out European rock’n’roll clubs (especially German ones) in a near future…The vinyl version (you’ll also get a download code in case you need the mp3s) is released by Glunk Records, which is run by the Über Röck guys, so you can trust them when it comes to rock! Apparently, Glen Matlock once said “Sick Livers? Hate the condition, love the fuckin’ band!”, you’ll probably think the same!/Laurent C.