As The SICK LIVERS are about to release their new album “Mid Liver Crisis”, we asked Ginge (vocals) a few questions about the band, his music tastes and inspiration. 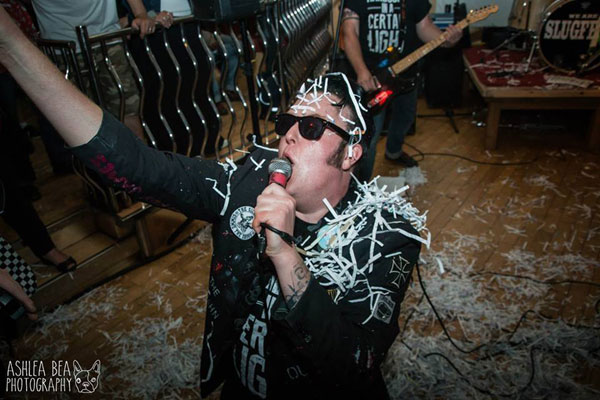 Can you introduce the band? When did you start?

Sure thing. The Sick Livers are VJ (guitar), DJ (guitar), Dai (bass), Matty (drums) and myself, Ginge, who shouts and screams stuff! We started out at as 4 piece circa 2007, released a few EPs and then exploded! The hiatus done us good, we recuperated, DJ joined us on second guitar and it was the injection we so desperately needed. He gelled Dai’s bass work and VJ’s fizzy guitar perfectly, and that line-up is the one you see today.

Your new album “Mid Liver Crisis” is out on Glunk Records/Baldy Long Hair. Can you tell us about the recording, and these two record labels? I heard about a cassette release soon?

“Mid Liver Crisis” is due for general release in August 2015 and there’ll be loads of formats and versions available via Glunk in the UK and Europe, and Baldy Longhair in the America and Canada. The labels suit us perfectly, both carry the same DIY ethos as ourselves, and it really is a match made in heaven… or hell! We can do things our way with companies who are sucking on the same proverbial tit as us. Glunk operate just down the road from us in Wales and they released our debut album. With “Mid Liver Crisis” they’ve gone over and above, beavering away behind the scenes to get this album heard. The same can be said for Baldy Longhair who operate out of New Jersey. We were elated when they offered to put out the album in the States, especially as we adore previous stuff they’ve released. A massive thank you must be given to the labels. Also, Baldy’s The Disconnects will be joining us in August for a UK tour. I cannot wait for that one!

You mention TURBONEGRO and ZODIAC MINDWARP in your biography. How are these two bands important for you? Can you think of any other UK bands in the same vein?

Those two bands seemed to get name-checked a lot on release of our debut album. Personally, I love them both and you can definitely hear the influence in our tunes, if only in my input lyrically and the melody that accompanies the riffs the boys write. That’s the great thing about The Sick Livers, we all listen to different shit and not necessarily all in the glam or punk genre. In regards to UK bands, it’s pretty hard to think of bands that compare in what we do. I don’t mean that in a big headed way, I guess it’s a very niche genre here in the UK. We’ve had natural comparisons, as well a split release and some tours with The Hip Priests. A new-ish band, Swamp Delta, from the Midlands seem to be harnessing that sleazy guitar groove. They’re ex members of Gaye Bykers On Acid and Crazyhead. I hear they’re very fond of us via our bassist Dai. Their forthcoming album is called “Sick Liver Blues” so what’s not to like!

The SICK LIVERS seem to be a pretty wild band to see live. Your favourite shows and wildest live moments so far? You also recently played with The DICTATORS, right?

Every show is something of an event and it all kicks off in some way or another. Give it one person, hundreds or thousands – you always get the full throttle live experience from us. We’re only as good as a game party audience though, and luckily we seem to attract that crowd! Picking one moment is pretty tough, but our last gig involved a naked man assuming the 69 position on top of me as I lay on my back covered in shredded paper! So yeah, our shows can be a tad wild!! The recent gig with The Dictators was fantastic. I’m a massive fan and to have the privilege of the support slot was ace. Really nice guys too. Ross The Boss took time to chat and he was equally as humbled as ourselves to be playing. He just seemed really happy to be playing those old Dictators songs live again. A top night all round.

How did you get the idea of writing “I Wanna Be A Jäger Girl”, and “Smell Of Elvis”?

“I Wanna Be A Jäger Girl” came about after spending far too many hours in lovely, grubby venues where girls come around and sell shots of Jägermeister. I guess I just wanted to be one of those girls, just for a night. No-one needs to see me dolled up though! The song is probably a release of my inner feminist and has empathy and admiration for the girls who do that job. “Smell Of Elvis” came about after my missus bought be some aftershave balm from a budget shop here in the UK with Elvis Presley‘s signature on it. It smelt fucking awful, but hey, if everyone keeps saying I look like a fucked up version of The King, I may as well smell like him. Albeit almost 40 years since his death!!

Is rock’n’roll too safe, or just dead today?

I think rock ‘n’ roll is alive and well, you just gotta look in the right places. There’s tons of great bands out there, you just gotta wade through the mediocre corporate safe shit to get there. Scratch the surface, go see some underground upstarts in some sweaty venue, and you’ll always find the good stuff.

Since you’re from Wales and wear spray-paint punk jackets, I can’t help thinking about early MANIC STREET PREACHERS, although their influence can’t be directly heard in your music. Do/did you like them?

I absolutely adore the Manic Street Preachers, up until “The Holy Bible” at least. On growing up, they were my Clash. I lived and breathed ever word they said. So vital in my teenage years, they got me through the good and bad times. I bought all the early stuff on day of release and on every format. I stupidly sold them ’em for drugs in the late 90s, but hey, that’s drugs for you! The Manics weren’t lying when they said “You Love Us” because that’s exactly what I did!

5 albums you couldn’t live without, and a few words about them.

Always hard to pick top 5 lists but I’ll have a go. These are all subject to change at any time!

“The Holy Bible” by Manic Street Preachers. An intelligent, heartbreaking and personal account from Richey Edwards which soundtracked my teenage years.

“Appetite For Destruction” by Guns N’ Roses. My first real induction into how dangerous rock ‘n’ roll could be. For a very brief period, G N’ R were the bomb.

“Scream, Dracula, Scream” by Rocket From The Crypt. A defining rock ‘n’ roll album that made me fall in love and want to be in Speedo’s gang.

“Total 13” by Backyard Babies. An album that soundtracked my drug days. They weren’t lying on the title, every track is killer. An album they’ve sadly never bettered.

“New York Dolls” by New York Dolls. The swagger, attitude and glam stomping debut from New York’s finest totally blew me away on first listen and remains one of my favourite albums of all time. People moan about the production but this is the bomb.

Are you into rock’n’roll books/biographies?

Do you plan on touring in Europe?

A tour of mainland Europe is something we hope to make a reality in 2016. We’ve gained loads of good contacts to make a DIY tour happen after briefly dipping our toes on Irish soil earlier this year. There’s also an East Coast tour of the USA on the cards. Best we sell some records and try not to self destruct! 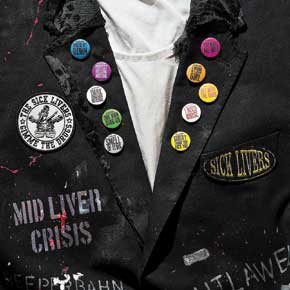 South Wales’ dirtier punk rock’n’roll band is back with 10 new songs spitting right in the face of political correctness. When so many bands try and copy TURBONEGRO from A to Z, The SICK LIVERS take the best ingredients of Norway’s Denim Demons and use them in their own way, bringing us catchy songs like “This Is My Denim”, or “Perfect Nothing”, some high energy rock’n’roll (“One Man Stag Do”, “Out With The Dogs”) for DEAD BOYS fans and up tempo punk fury (“Smell Of Elvis”.) You’ll find what you need on “Mid Liver Crisis” if you’re looking for your rock’n’roll fix, STIV BATORS needed Lunch, The SICK LIVERS need a rock’n’roll Nurse just like the NEW YORK DOLLS!
UK SUBS‘ Charlie Harper described “Dark, Dangerous and Delicious” as the best tracks HANOÏ ROCKS never wrote, and well, how could Charlie be wrong?
You’ll probably get weird looks when walking down the streets singing “You Make Me Wet” or “I Wanna Be A Jäger Girl”, but well, isn’t it what rock’n’roll should be about?/Laurent C.

he name of the band and the album title both tell us that these guys are probably not the new straight-edge hardcore sensation!… Hailing from South Wales, The SICK LIVERS like to sing about drugs in a punky catchy way (“Gimme The Drugs”, “Cocaine Jeans”) with the help of loud sleazy rock’n’roll guitars, and deliver some dirty non-PC fun in 8 songs.
“Get Ready”, “Seven Year Itch” or “Sick Liver” will get punk rock’n’rollers singalong quite easily at the band’s gigs, and TURBONEGRO fans will love the guitar solos a tune like “Blood On Your Halo”!
The SICK LIVERS probably got too much ROSE TATTOO, AC/DC, or NASHVILLE PUSSY in their blood, but we won’t complain about that! “Bummed To Death” will leave you want more…
I was talking about hardcore, well the vocals actually sometimes sound close to some in the early 80s hardcore bands, you can feel some high energy running in the these guys ‘veins, and it wouldn’t surprise me to see them selling out European rock’n’roll clubs (especially German ones) in a near future…The vinyl version (you’ll also get a download code in case you need the mp3s) is released by Glunk Records, which is run by the Über Röck guys, so you can trust them when it comes to rock! Apparently, Glen Matlock once said “Sick Livers? Hate the condition, love the fuckin’ band!”, you’ll probably think the same!/Laurent C.