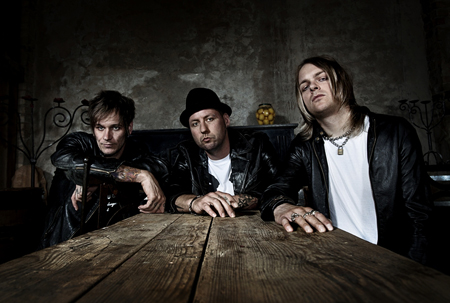 We’ve been following TORPEDOHEAD for a few years now (since their debut album “Lovesick Avenue”), but never interviewed them before… “Greetings From Heartbreak Key”, their new album gives us the occasion to talk a bit with Germany’s most promising rock’n’roll band.  Sven (lead vocals/guitar) answered our questions.

Can you tell us a bit about the band history?

Torpedohead was formed in winter 2008 and since we have been giging relentlessly in Germany and other European countries, supporting international rock acts such as the legendary New York Dolls, Nashville Pussy, Dan Baird, and Prima Donna among others.
After hitting the streets with our self produced debut Album ‘Lovesick avenue in 2009 and a change behind the drums , we set up our home in 2010 at the famous Woodhouse Studios in Germany to record the five track EP ‘Let’s Go For A Ride’ with producer Siggi Bemm (Kreator, Lacuna Coil). The release kickstarted an avalange of great reviews in the press and left fans screaming for more. So wasting no time, we returned to the Woodhouse studio shortly afterwards to record our new album ‘Greetings From Heartbreak Key’.

You’ve just released a new album “Greetings From Heartbreak Key.” Can you tell us about its writing and recording? How would you compare it with your previous releases?

“Lovesick Avenue”, our first album was written and recorded before we ever played a live gig and we were still looking for a sound that would fit us at the time. For us we didn’t focus on making a record to please the press or the audience, it was all about having a blast and making music that we love. So there’s a big range in style on our first record, that focuses around the rock n’ roll river and all it side arms. We just let our selves drift along and got back to shore whenever we liked. In the end we had a very fresh sounding record that we produced by ourselfs.
When we started touring and playing shows, we found out more and more what sound fit us and we worked on shaping that to its best. We wrote a ton of songs that all had a more fast forward rock drive than our debut album. After recording a lot of demos we decided on working with a producer who has a big name in the german rock/metal scene called Siggi Bemm, because he is known for his huge rock sound.
We wanted to move away from the garage sound of the first album and take it to the next level.
The EP “Let’s Go For A Ride” was a preview for our second album. Not only production wise but also from a song point of view. We made the fast rock tunes faster and we made the melodies bigger. So what we’ve got now is a rock album that leaves no questions un-answered. You’ve got action, riffs and killer hooks, All you need for a good drive on the highway !

What were your favourite songs to record? What are the ones you like to play live the most?

It aint that easy to pick one of your own songs, cause they are all our babies. But there is a bit to tell about some of our fave. songs: Rock n’ Roll Satellite has been a hit in our live set since day one. If our show did not grab you untill that song is played in the set (which is highly unlikely if you’re into rock n’ roll !), you will be singin’ along to this track.
Crank it up and check for yourself.
The Songs “Red City Lights” was recorded completely live without any overdubs. It’s just Sven sitting in his kitchen strummin’ the guitar. We tried to record that song with the whole band, with overdubbs, but in the end it just sounded best to play it simple, just sitting down with the guitar and singing it live in one take. It’s also a bit of reminiscent to our first record, which featured a lot of acoustic guitars.

Your music both combine hard rock’n’roll and pop punk. How and when did you get into these styles? Do you think that being in between two or more styles make things more difficult for a band?

That part has a lot to do with the fact, that all three of us started playing in bands in the early
90s. As you know that was the hightime of grunge, alternative and punk. Although we started out listening to stuff like AC/DC, Guns N’ Roses or Mötley Crüe you could not make up a band as a teen in THAT time with THAT music. You would get no gigs at all ! So we all wound up in punk-kinda influenced outfits. At the time we got heavily into bands from the UK like The Wildhearts or 3 Colours Red and also old 70s Stuff like The Clash. Bands that played a modern kind of punk rock with catchy chorouses, but with a midtempo rock n’ roll backbone. Well, as the story goes on we wound up wanting to sound just like these bands with our old outfits.

Today we don’t “try” to combine anything or try to sound like. We just have this influence of hardcore rock n’ roll fans that where raised in this pop-punk surrounding and that’s what we sound like and what the people might hear.
And yeah, it’s difficult if you have your own style and don’t fit in to the usual labels.
That’s what the song “Love is a Dog” of the new record deals with in some aspects.
“I ain’t a one trick pony”. There’s more tricks we got up the sleave.

You’ve played quite a lot of shows so far, sometimes opening for bigger bands. How did it go?

Yeah, we played with with some of our fave. bands like the New York Dolls and Dan Baird (Georgie Satellites). Those are always great shows, when you can share the stage with one of your idols. And they all have been very nice people so far and you can always pick up some advice or learn something while playing with theses old heroes. Very inspiring and pushes you to keep getting better !

It seems like conditions are getting harder and harder in Germany. I remember, like 5 or 10 years ago, every band wanted to tour there, it was like a promised land for punk rock/rock’n’roll… Has it changed for you? What other German bands should we check out?

Well… the payment is not as good as it was years ago. You earn much more if you are a cover band playing other peoples songs. With original music it’s really hard. But the food and of course “the beer” is still great ! You should check out our friend “Mike Zero”, he’s been singing the backing vocals on “Moonshine Highway”. His last record features Captain Poon (bloodlights, gluecifer) on guitar.
Great album !

5 important albums for you?

Hard to break it down to 5, but here are some…

Movies:
Skyfall
Gainsbourg
Foo Fighters – Back and forth

Are you planning to tour and promote the album in the following months?

We will be touring in Italy around feb. and in march we are planing to cross the channel over to the UK. France is also in the making and we hope to rock there soon. And for our French backstage rider: ” Je voudrais deux bouteilles de vins… une bouteille de chateau du haut pleateau et une bouteille de Lussac Saint-Emilion !” HAHA ! Rock n’ Roll !!