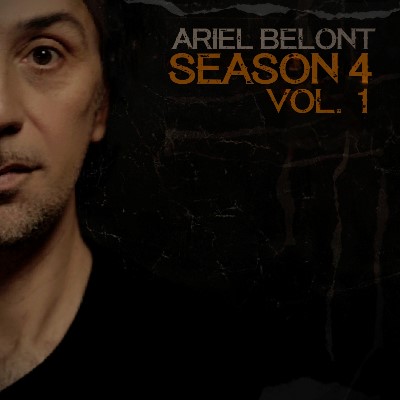 Ariel Belont is back with a vengeance here. I’ve been witnessing the process of these songs, from being riffs ideas and small structures, to this final mix. This first half (it’s an album, divided into 2 eps) is not only explosive, it’s amazingly produced and mixed by Nahuel Martorelli, who also plays drums on every track. All I can say is some albums are made by Rock fans for Rock fans, people who are into it because they could truly identify with their heroes back when the world was a better place, and now they can give some of what they learned back to the world. So this is case of “Season 4 – Vol 1” by Mr Belont. As soon as you hit play you bump onto “El Toro” and you are immediately hooked. A very fuzzy riff, perhaps evoking The Black Crowes’ Lions era, mixed with Ariel’s interpretation of how a new John Corabi song could sound, then a Power Pop chorus softens the environment ala Jani Lane. “Only More Day” is the second track, Johnny Cash’s Spirit is all over this tune, autobiographical in a really accurate way, dude confesses his desire of going back “just one more day” so that he can enjoy some of the freedom that the digital era and “Idiocracy” took away from us. I believe a lot of us feel like this, specially when he describes himself a “lonely boy seeking shelter from the rain”, this narrative can relate to us all. Back then, and I believe I’m not only speaking for myself here, we used to look up to creative musicians. Most of those heroes are gone now, so are those “better days” that he refers to so crystal clear. “Hit and Run” sounds like a crossover between L.A. Guns’ “Hollywood Vampires” days and Led Zeppelin, the main riff could have been written by one of the many Classic Rock acts from the 1970s. “Fake” starts with the main riff and Ariel singing through some sort of megaphone effect, only to explode a few seconds later changing his vocal range and making the start of the song sound like a true revelation. This sounds like a mix of The Knack’s My Sharona with Cheap Trick or even Foghat’s “Slow Ride”, powerful and energetic. This first half of the album closes with “Drama Queen”, and boy I can say this one is a personal favourite. Ariel sent me several mixes of this song over the last few months. The arpeggios at the beginning have a classic Def Leppard vibe like “Bringing On The Heartbreak”, the way the vocals are mixed is not only colourful, but it blends brilliantly with the atmosphere of drums and the breaks. This song could have easily been a hit back when the world was not filled with retarded people staring at phones. Can’t wait for Vol 2 to be out. Trust this dude, he knows. /Juan Pablo Mazzola.