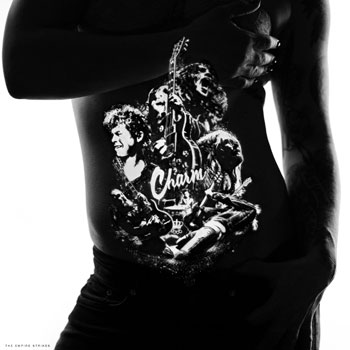 Helsinki’s 70s rock influenced band The EMPIRE STRIKES are back with 12 songs. I guess opening an album with a song called “The End” is an interesting move especially when the song has a tragic and grandiloquent feel to it. Even though songs like “Danger”, “Leeches, Lies and a Mighty Hoax” or”Amor Por La Vida Hasta La Muerte” have a bit of late HELLACOPTERS into them, they still have their own identity with a bit of radio friendly rock in their choruses. Indeed, the band always sounds melodic thanks to Tommi’s vocals and lots of arrangements (violin, trumpet, backing vocals…), they’re sometimes even close to early ELTON JOHN in “Blinded ByThe Light.” Roky Erickson probably smiled from up there when he saw the song title “Theme From Roky”, and he might even have liked the song as well as “Tigerlillies” that both have an interesting 60s vibe to them. Nevertheless, The EMPIRE STRIKES still enjoy playing their good old hard rock’n’roll in songs like “Rainmaker” and its 70s KISS touches or in “Blackheart.” The album is out on September 6, so you know what you have to do if you need to add some new rock’n’roll in your life! /Laurent C.