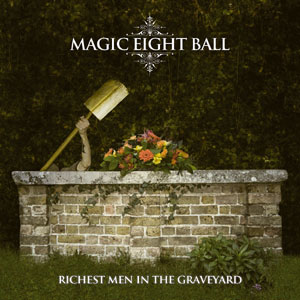 MAGIC EIGHT BALL delivers an interesting mix of modern rock and 80s/90s influenced alternative rock, including big metal riffs, boogie drum beats in “Keep Me Out Of The Sunshine”, good vocal melodies, and dark atmospheres close to bands like TOOL at times, especially in “Falling In Love’s Like A Vampire.”
Some ENUFF Z NUFF influences can be heard in “She’s Leaving”, and “Once Again”, so it’s not surprising to learn that Donnie Vie was a guest on their previous album, both bands share a common interest in BEATLES influenced vocal melodies. MAGIC EIGHT BALL might come from Southern England, but they know how to sound sunny on songs like “Dying To Say” or “Tomorrow Can Wait.”
The band also released a live album, “Richest Men In The Dolls House”, in which you can hear the raw side of the band better, and singer Baze Francis also has a live EP out “Live at Molly Malone’s”, so you’ll undoubtedly find something to your tastes./Laurent C.