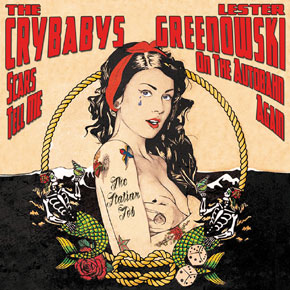 Lester was The CRYBABYS‘ bass player on their last European tour, so the idea to join forces for a split record probably just came out naturally, and it seems like it wasn’t a bad idea at all.
After a 15 years hiatus, The CRYBABYS are back with original members Honest John Plain (The BOYS), Darrell Bath (VIBRATORS, DOGS D’AMOUR…) and Robbie Rushton (GUNSLINGERS, MANNISH BOYS…), and they sound better than ever! “Scars” is a song that was already released on “Dirty Laundry”, but they re-recorded it for this 7″, and since the STONES influence is quite obvious, they also decided to cover “Tell Me”, and it just makes us want to hear more!
On the other side, LESTER GREENOWSKI offers us two new songs, “On The Autobahn”, a RAMONES kind of punk rock song which was probably inspired by touring in Germany, and “Again”, a catchy old-school rock’n’roll tune.
Add a killer cover by Guillaume Sellier (Teenage Lust Prod) which was also the poster for their Parisian gig on the last tour, and you have a great rock’n’roll record!/Laurent C.