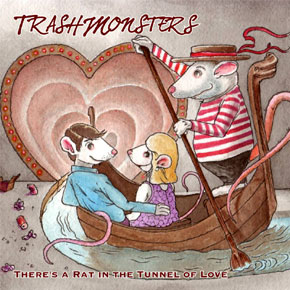 Formed in sunny Orange County, California in 2010, the TRASH MONSTERS logically have strong pop punk influences, but they also like early punk rock’n’roll -which can mostly be heard in the guitars- and these guys are sure not limited to one music genre. Whether you’re into Lookout Records, NOFX or The RAMONES, songs like “People Of My Neighborhood”, “I Was a Teenage Pessimist” or “This Moment” will probably work for you, but you might also be surprised when listening to “I’m Still In This Game” for the first time.
There’s sometimes too many “ohohohoh’s” backing vocals for my tastes, but a rockin’ mid-tempo song like “Letting Go” and the crazy rock’n’roll “Maggie May I?” make up for that without any difficulties. Some will say that a name like TRASH MONSTERS would fit a psychobilly band better, well you’ll get a bit of it in “This City”, and early US hardcore fans will even get their share with “I Hate Everything.”
In the end, it’s not surprising at all that some members from REEL BIG FISH, GOLDFINGER, DUANE PETERS AND THE HUNNS, TSOL, The IRISH BROTHERS etc.) all have contributed to this album./Laurent C.