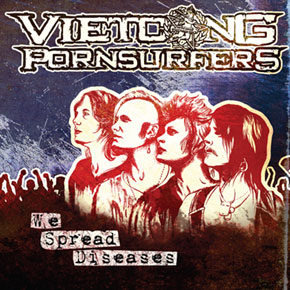 Swedish punk rock’n’rollers VIETCONG PORNSURFERS have been around since 2007. After several line-up changes, here they are back with a new high power release. As years went by, the band’s music evolved towards an early TURBONEGRO kind of rock’n’roll mixed to some MISFITS influences that can be heard mostly in Tom K’s vocals.
While The SURFERS like have a thing for speed-up punk’n’roll (“Make You Hate”, “Just Another Crime”), they also know how to add a very welcome glam rock touch in songs like “First High” or “Don’t Look Back”, and sometimes mix both sides (“Hate Your Band”) with natural ease. The raw and live production really fits with the band’s energy and emphasizes Rackarn’s powerful drum playing.
Scandinavian rock meets American punk’n’roll works quite well on this album, and I can see it being appealing to the  German audiences especially. In one of the best songs of the album (“Dead Track”), singer Tom tells us “rock and roll was dead long before I was born.” It might be true, but in this case, “We Spread Diseases” is a good way to work at its resurrection!Laurent C.