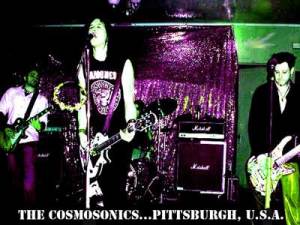 The SCIENCE FICTION IDOLS turned into The COSMOSONICS and are back with a new album. Gary D’ Grave (lead vocals/gutars) tells us more…

Why did The SCIENCE FICTION IDOLS become The COSMOSONICS?

From 2002 – 2006, Harrison, Angelo, & myself were very active members of the sci-fi idols, both business-wise & creatively. When that band splintered in May of ’06, we chose to remain musical partners. We shifted band roles a bit; I took over all of the lead vocals, instead of the fifty percent that I used to do, Harrison picked up the back-up vocal slack, & we hooked up with a guitarist, Chaz, who could play both lead & rhythm, plus assist with backup vocals. Chaz also proved to be an excellent addition when it came to the business side of The CosmoSonics. For the first time in years, we had 4 active, hard-working members of our band !

When did you record “Junk Rock… For Lover$”? How long did it take? Do you see this CD as a new start?

“Junk Rock…For Lovers!” was started in September of ’06, & finished in January of 2007. We see the CD as a continuation, rather than a fresh start. The CosmoSonics formation may have signalled a fresh start, but the recording & release of the “Junk Rock…” album was meant to expand and continue the musical direction that we set with the last sci-fi idols record, “Diamonds And Demons”. We want every CD that we do together to be better than the last…so far, we’re 3 for 3 !

You describe your music as “Junk Rock” in your bio, can you explain?

“Junk Rock” is a silly, sarcastic way of categorizing The CosmoSonics…everyone needs a label & category today, right ? The term actually came from an old television show from the US called ‘WKRP in Cincinnati’… Junk Rock is just a mash-up of all of our musical influences – mainly : “glampunkmetalpopblues”

How do you usually write songs? Is there any main writer?

I’m the main songwriter…I’ve created most of our songs while sitting at home, in front of my 4-track & drum machine. Once I’m excited about something that I’ve demo’d, I bring it to rehearsal, where the other boys do their thing with the music. Other than myself, Angelo has contributed some lyrics, and Chaz & Harri have gotten more active with creating the music.

You’ve already played many shows… What were the best ones? The worst ones? Any anecdotes?

The best shows… I would say our CD release show, at the legendary ‘31st Street Pub’ in downtown Pittsburgh. The fact that we were actually putting the CD out, after only 10 months as a band is something that we’re very proud of. ‘Glamfest’ in Philadelphia was such a party, I’d have to include that with the best shows. The worst shows… None – anytime we get to play our rock’n’roll in public is the best !

What is your view on the music scene today? Is there really a “rock’n’roll revival”?

As long as people continue to crave sex, there’s gonna be rock’n’roll. As long as there’s people working shitty day jobs, barely able to pay their rent, there’s always gonna be some rock’n’roll going on. So, I don’t see any ‘revival’…I think rock’n’roll is always there; the popularity of rock’n’roll has faded, however. The music scene ??? Underground is where it’s at. The days of Guns N Roses & Van Halen ruling the pop music charts is long gone…and nobody will ever convince me that Nickelback is rock’n’roll…who wants to fuck to that ??? So – dig a bit deeper, & you’ll find some great bands in the underground…plus, you can see many of these bands playing live in tiny, intimate venues, which is where rock’n’roll really comes alive!

10 albums that you couldn’t live without?

Did your friend really punch a Good Charlotte?

No…sorry. That song is coming from a sarcastic fantasy idea, written after spending a few days drinking on the Sunset Strip.

What’s next for The COSMOSONICS?

As of early October, 2007 – we’re on the verge of signing a deal with a small indie label ! If all goes well, there might be a re-release of “Junk Rock…For Lovers!” in early ’08, with bonus tracks included. Then, we begin to plan for the follow-up record – plus, we plan on touring throughout the US in 2008…maybe a visit to Europe is in our future !!!