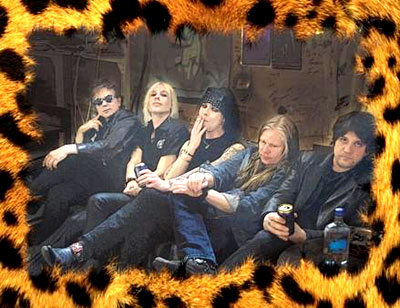 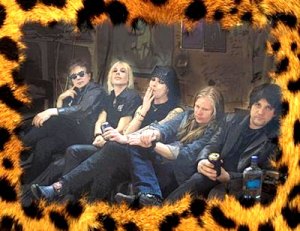 PLASTIC TEARS were one of the first bands we interviewed and they are back in 2010 with the all leopard print album ”Nine Lives Never Dies”. Miqu December (vocals) tells us more…
Can you tell us a bit about your new album and its title “Nine Lives Never Dies”? Who produced it?
The title refers to the fact that even though we’ve had hard times and even split up a couple of times we still keep coming back.
Just when you thought you’ve gotten rid of us for good, we’re back again, louder and nastier than ever! The album was pretty much produced by ourselves.Do you have any favourite songs on it and why?My personal favorite is You Destroy Me. It’s a great pop/rock song with quite intimate lyrics. Traditional classic rock’n’roll with a little bit of pain and tears mixed into it.Why such a long silence since “Stranded In Rock’n’Roll”?Well, the band basicly split up quite soon after releasing the Stranded-album. The break-up was never ment to be permanent, just had to take a time out before continuing with the band again.
We were on a break from about 2000 to 2005, so it took us a while to get things going again before the new album.

How has the band line-up changed through the years?

This band has always had a hard time with the line-ups.
Had some fucking mental guys in this band, but this line-up has been together for 3-4 years, so it’s looking good and stable.
This doesn’t mean though that these guys ain’t crazy and difficult sons of bitches. They are. I guess we’re just getting on each others nerves in a harmonic way now… or something…

When I first interviewed PLASTIC TEARS almost 10 years ago, we talked a bit about the Northern European rock scene. It has grown bigger since those days. Has it changed a lot to you?

There’s always been lots of rock’n’roll bands in Finland, but I guess for example in Sweden they’ve discovered rock’n’roll and glam rock more in the few past years. At least there’s a million 80’s Sunset Strip kinda bands coming out of there now.
The Scandinavian scene is good and well I think, but it hasn’t affected us a lot.

What are the good and bad things for a band like you in Finland?

The good thing is that there’s a good grassroots underground scene for this kinda music. The bad thing is that it’s such a small country, so it’s very hard to get a living out of the music alone. And the marketing of bands internationally is still not good here, even though a lot of Finnish bands are enjoying quite good success nowadays abroad. More professional managament and promotion is desperately needed!

HANOI ROCKS has always been a big influence to many Finnish bands. Do you feel like you’re paying tribute to this band who started it all there?

They’ve been a influence on us too, and I guess we represent the same musical direction.
We’re paying recpect to all the great and true rock’n’roll bands out there that have or have not influenced us. Hopefully we’ll get some of that respect back someday, hahaa!

What about SMACK? It seems like they’ve always been a big influence in Finland but remain underrated in the rest of the world…

-SMACK was great, and yeah, they were pretty influential here. But I guess they never made it very big in the rest of the world, and a lot of people haven’t heard of them. Those who have must realise the potential this band had.

The Internet has changed the music industry and world a lot, how did it affect PLASTIC TEARS?

It’s much easier to spread your music and keeping contact nowadays. Still remember mailing C-tapes, CD:s and shit in the beginning of our career…
I’m so happy this interview can be done by email and not snail mail. The world has gotten smaller.

How is the image (the way you dress…) important for the band?

We pretty much look the same all the time, so it’s not like we only pose for the photo shoots and live audiences.
I have more or less been into rock’n’roll and the rock’n’roll style of dressing since a child, so I guess it would be kinda strange to dress as what some people see as normal.

There is a lot of things going on right now, let’s hope that they will come true.
If things go as planned, we’ll be able to spread our music to a much wider audience than before. We hope 2010 and the years to come will be good to the Plastic Tears for a change!