We’ve asked Arizona’s best sleaze rock secret WHITE DEMONS a few questions in order to know more about them. Read about their views on nowaday’s rock scene and how Kim Fowley found out about them!

So, who are WHITE DEMONS?

Nick Kokoros lead guitar/vocals, Mike Christie guitar/vocals, Patrick McKay bass/vocals, Jack Obregon drums.
Four individuals who have similar yet different influences that come together when we write songs. There’s no premeditation and we don’t forecast anything in regards to writing in a particular style, we just create music and if we enjoy playing it, then it gets to stay in the mix.

Your first album “Say Go” was released in 2006. Have you been touring a lot after it got
released? (Where?)

Yes, we did do some regional touring right after the release of “Say Go”. The record came out in July 2006 and we did some touring throughout the southwest and west coast of the States. Unfortunately the band fell apart within the year and by the spring of 2007 we were done, our drummer had up and moved to New York City and some members went out and toured with other bands.

I’ve read that some songs of “Say Go” were used for movies and TV shows?

Oh yeah that’s true, we have licensed quite a few songs from “Say Go” for use in movies, TV shows and video games. We were playing a show out in Orange County, California during one of our west coast jaunts and an A&R guy from Riptide Music came out to see us that night and after we completely blew the roof off the joint with our set, he came over to introduce himself to us and he says, “I don’t know what in the hell I just witnessed and saw in here but I want to sign you guys to a publishing/licensing deal right now”!
Haha so yeah, thanks to that fortuitous and eventful night, you can now hear the songs, “Say Go, Spit On My Liver, Tear It Up, It’s All About the Rock and Pill in many popular movies, TV shows and video games.

Kim Fowley said: “Their masterpiece “Say Go” indicates they can write a savagely
stupid epic. If they have an album’s worth of material this good, they are destined to be the
first bad boy band of the 21st Century to make a difference.” What was the context? Did
you meet him?

Well, the context was that he had “discovered” us on our myspace page back in 2006 and he furnished us with that quote after listening to the song “Say Go” on our profile. Then he had one of his business associates contact us who asked if we could exchange numbers and schedule a time to talk with Kim on the phone, so that went on for a little while, our phone conversations.
I never did get to meet him but we would often have these late night talks on the phone, he would be telling me about all of these crazy and outlandish movie story ideas he had and was going to produce, which consisted of midgets, carnies, women, chaos, rock n roll and general wackiness, and he really wanted our band to come out to California and be featured in these films he was gonna do, unfortunately none of those talks ever manifested into a reality and it’s too bad because that would have been a fun experience!

Tell us about your new album “Bleed It Out”. Where did you record it? Do you plan on
releasing a vinyl version of it?

The new album was recorded, mixed and mastered by Larry Elyea at Minds Eye Digital Studios in Glendale, AZ. We had a really good time working with him on our first release “Say Go” and we were so pleased with the finished product that we decided to go back and work with him again on “Bleed It Out”.
Yes, we do plan on releasing a vinyl version for “Bleed It Out”, stay tuned for that! 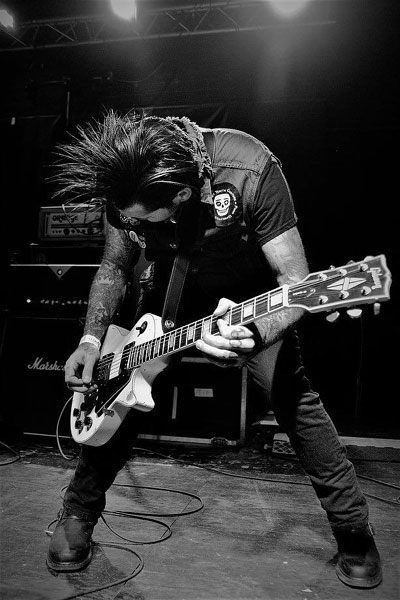 There was still quite a good punk rock’n’roll/glam punk revival when you guys started to
play together. The scene has been getting smaller and smaller around the world. Do you
sometimes feel alone as a band?

Oh yeah very much so and it’s pretty frustrating trying to get acquainted with what’s going on in the live music scene these days as there’s not too many “like-minded” bands that are even playing straight forward “rock n roll” music right now. Fortunately we have managed to connect with a few bands out in California over the past year that are playing some good punk / rock n roll and that’s been really cool, bands like The Focke-Wolves,
Symbol Six, The Cornfed Project, Something Ferocious and The Streetwalkin’ Cheetahs
and The Brutalists.

You mention punk and hard rock bands as influences, what bands/artists had a big
impact on you?

Yeah all of us have been influenced by punk and rock for sure while growing up and we have also ventured into other various forms of music as well. There have been so many bands that have made an impact on each of us, some notable names would be The Damned, Motörhead, The Ramones, Cheap Trick, MC5, The Stooges, The Ruts, AC/DC, The Who, Alice Cooper, Jimi Hendrix and many other great bands that have ever existed, we all know who they are.

What albums and live bands have you enjoyed lately?

Well I definitely still enjoy listening to the albums that I grew up with and I do so regularly, but I also try to find new stuff. Lately I’ve been enjoying stuff like Imperial State Electric, The Hellacopters, The Datsuns, Turbonegro but I’ve also recently discovered some new Scandinavian bands that are starting to come up, bands like Grand Royale, Scumbag
Millionaires and Heavy Tiger.

Have you heard about the Stiv Bators documentary “STIV” that will be released by
independent filmmaker Danny Garcia?

No, I was unaware of the Stiv Bators movie that is coming out. I have always been a fan of the Dead Boys and Lords of the New Church so I’m definitely going to check it out.

What’s next for the band?

We are currently writing new material for an EP release scheduled for next fall and now that “Bleed It Out” has been released we will be playing shows regularly, doing some regional touring along the west coast and will continue doing what we can to grow our fanbase.
Again, unfortunately there is not a lot of rock n roll happening over here in the States at the moment so what we would really like to accomplish soon is take our music overseas and do a tour through Europe, so keep in touch and we will let you know when that’s happening. 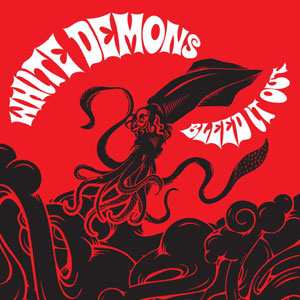 Hailing out of Phoenix, AZ, WHITE DEMONS released their first album “Say Go” in 2006, and got positive feedback from Kim Fowley, himself! Well, these guys are influenced by bands like AC/DC and the DEAD BOYS, so they can’t go wrong!
“Bleed It Out” hits us in the face right from the start with “Clot When I Bleed” and “Humiliation”, delivering a perfect mix of sleazy street rock and high energy punk rock’n’roll, something that has been hard to find since the demise of The BLACK HALOS.
“Suspending The Laughs”, “Rolling On My Spine” (great catchy chorus!), and “So Bad” bring the best of Scandinavian rock’n’roll to mind, while you’ll hear a bit of JOHNNY THUNDERS and HANOÏ ROCKS in “Beautiful Remains”, and in “Don’t Wanna Be Damned.”
Vocals fueled with cigarettes and whisky mixed to teenage hooligan backing vocals always work in that style, as you can hear in “Lost Gone and Forgotten”, and a song like “Shake It Lose” could have been on the last MICHAEL MONROE album.
It’s a mystery why I haven’t heard about WHITE DEMONS before, so if you’re like me, don’t miss this one!/Laurent C.