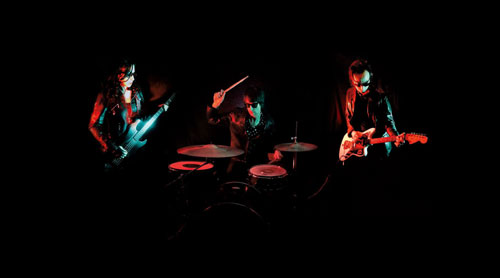 The dark side of Brooklyn brings us TWIN GUNS, who have just released their new album “The Last Picture Show” on Hound Gawd Records. If you love The CRAMPS, cryptic and hypnotic rock’n’roll, then you will be seduced…

Can you introduce the band?

Twin Guns is Andrea on guitar and vocals, Kristin on bass, and Jungle Jim on drums. We have been around for 5 years, and are based in New York. We play rock and roll.

You released two albums as a guitar/drum duo before. Do you see “The Last Picture Show” as a kind of new start?

Andrea: In some ways it does feel like a new start. Sometimes it feels like a different band, but since we never stopped playing since then, it just makes sense to be where we are now… It was a natural growth. I don’t regret becoming a three-piece, as I feel that we did our time as a duo, and did great. At least we made a statement; we proved that the power of a song and the way it’s presented and performed, goes beyond the limitations and expectations of that formula… it worked. Then we moved on. I am much happier now to have amplified the sound palette with the addition of Kristin on bass (and good taste). Being a 2-piece and having to hear comparisons or being associated with the White Stripes or Black Keys got tired after awhile. I don’t even like those bands.

“The Last Picture Show” is out on German record label Hound Gawd Records. How did that happen?

Andrea: It was time to make a new album and get some new music out, and initially we thought of self-releasing the album (we didn’t have much luck finding a label with the previous one, “Sweet Dreams”), so I started contacting recording labels. We were almost ready to give up (having already recorded all the songs), upon not getting much feedback, but then I got a reply from Oliver at HoundGawd!, who contacted me enthusiastically, and let me tell you… that was totally at the last minute. We couldn’t have been happier when it happened! He loved the songs, “The Last Picture Show” found a home, and the rest is history.

Tell us about the recording of the album…

Andrea: We recorded at N.Y.HED Studio, with the lovely team of Matt Verta-Ray and his wife Rocio. We wished the sessions would never end, as we all really enjoyed the experience. It’s very cool to record with them as they are such fans of great music (especially The Cramps), and the studio feels like a time capsule into all things cool and Rock’n’Roll. In-between sessions we often ran into Kid Congo Powers, who at the time was recording with Mick Collins of The Gories and Bob Bert (Chrome Cranks, Sonic Youth) on a new project and album together; I honestly flirted with the idea of asking them to play on the Twin Guns record, but it didn’t happen… haha. I know these guys, but still too shy to ask that sort of thing. We started recording the album in the humid heat of the NYC summer, and finished in the freezing winter of 2014. One time, the lock of the studio door was frozen (un underground entrance on the sidewalk) and we couldn’t get inside, so Matt had to run to the store and get a hot cup of water to pour on top of the lock… It was a whole process. When I finally got in the studio in took me a long time to get warmed up… fingers frozen and all. NY can be brutal in its weather extremes. In the end, the recording went great.

Jungle Jim played in The CRAMPS and The MAKERS. Have any of you played in other bands before?

Andrea: I played in other bands before (mostly as guitarist), but none of them found momentum as much as Twin Guns.
The last band I played guitar for, before forming a band on my own, was Rockethouse (an electro-shoegaze-garage outfit), and we had fun touring the west coast, but we kept losing drummers, and got difficult keeping it together.

Kristin: A number of them, yes, but this is the first one that I was actually a fan of before joining.

You’re influenced by the dark side of cites, especially New York. How would you describe living in NY nowadays? 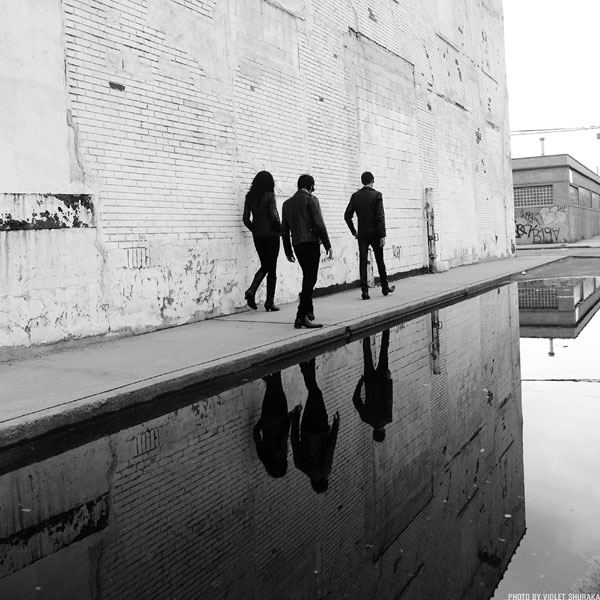 Andrea: I have been living in New York for 22 years, and have seen lots of changes… I don’t find it particularly exciting these days, and sometimes wish to live somewhere different… maybe an European town. It’s easy to be opposed to change, when you get the feeling that what you know and like about a city is being compromised, or changed altogether. But for as much as the city has transformed, I can still find aspects of NY that are inspiring, after all. It’s like when you focus on details that others ignore, and have sort of a romanticized vision of it. I have always been attracted by cities decay… traces of the past in everyday life… It fascinates me. I’m like an archaeologist.

Kristin: I’m a born-and-raised New Yorker. It’s been difficult to see so many of the things that give this city its identity get priced out, leaving generic chain stores and aesthetically bland high rises in their wake. But there’s still so much that makes it a singular place to be. My New York was never just about the Lower East Side or the parts of Brooklyn you might see in movies; it’s about turning a corner onto to a side street and seeing some stunning and totally unexpected architectural detailing on an old office building. Or taking a bus from downtown and watching the city change on your way up to the re-created Medieval abbeys that were built in a park in Washington Heights. If you look carefully enough, you can find almost every world culture represented here in some way, through its food or art or language or something. That in itself is miraculous and humbling.

Do you tour a lot in the US?

Andrea: We did a few tours of the USA, long and short trips… We go on the road at least once a year, but still haven’t managed to bring ourselves to the west coast. So many states so little time!

Garage, 70s punk, surf rock and psychedelia are all part of your influences, but movie soundtracks also seem to have influenced you a lot. Have your music been used for any movies yet?

Andrea: Yes, soundtracks are part of our influences, but no, we haven’t made it to the movies yet… I always felt that we could be good for it. A few years ago one of our filmmaker friends utilized our “Little Subway Rider” for the opening credits of a proposed tv series (which starred David J. from Bauhaus, and Black Rebel Motorcycle Club in the closing titles).. but not sure what happened.

Your lyrics are mostly stories/fictions, right?

Andrea: They are stories, but not always told in a traditional storytelling way… More sort of expressionistic poetry. Sometimes they are like an exaggerated version of reality. I often write in first person, but that doesn’t necessarily mean that it represents me… It’s like being an actor, and telling stories from different character’s point of view.

5 albums you couldn’t live without:

Andrea: “Rumble” the Link Wray collection on Rhino, “The Velvet Underground & Nico”, Suicide‘s 1st record, “Kicking Against the Pricks” by Nick Cave and The Bad Seeds, “Nuggets” Volume 1. And so many others, but…

Jungle Jim: 5 albums that I couldn’t live without are “No Way Out” by The Chocolate Watchband, “Forever Changes” by Love, “No Other” by Gene Clark, “I against I” by Bad Brains and “Love It to Death” by Alice Cooper.

Kristin: “A Northern Soul,” “A Storm in Heaven” or “Urban Hymns” by The Verve; “Wretch” by Kyuss; “First and Last and Always” by The Sisters of Mercy; “I Against I” by Bad Brains (Jungle Jim snagged one of my answers!); and “Chant Byzantin” by Soeur Marie Keyrouz. 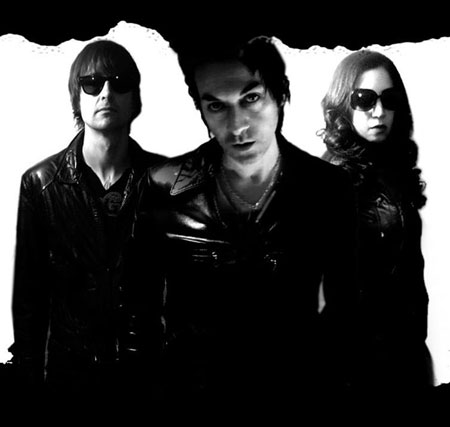 5 movies you could watch again and again:

Jungle Jim: My 5 favorite movies would be The Outsiders, The Babadook, Vampire’s Kiss, The Diving Bell & the Butterfly and This Is England.

Kristin: I’m in the middle of three: “The Gift of Healing Herbs” by Robin Rose Bennett; “Pattern Recognition” by William Gibson, and “Claire of the Sea Light” by Edwidge Danticat.

Here in France, we need more rock’n’roll then ever in those dark times. Will you come and play in Europe in 2016?

Andrea: We would love to tour Europe endlessly… We are hoping to make it out there very soon! 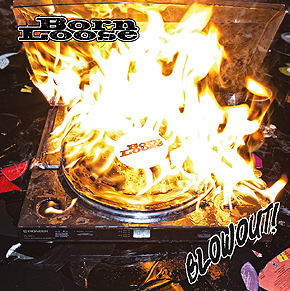 Brooklyn is not only the new place for hipsters, you’ll still find some real street rock’n’roll there, and when you have two former CANDY SNATCHERS members in your band, then you know you’re not going to play indie folk!
After releasing “I Loathe you” the first 7″ of the band, Hound Gawd records now offers us 12 brand new BORN LOOSE songs on vinyl! Wild as The STOOGES, crazy as the DEAD KENNEDYS, you’ll get no rest with these guys, from dirty punk rock’n’roll hits like “Ain’t Comin’ Tonight”, “Whiskey Holiday”, “Fair Warning”, and “Eyes Dispised”, to fast punk core bombs like “Driller Killer”, or “Alien Agenda”, you’ll sing along, pogo and spill your beer down to these songs. No polished production, and auto-tune here, it’s all real!
If you need your glammy fix, then listen to “PBR On The Rocks” and “Foot In Mouth”, then you can rock and roll to “Ain’t That Swell (Baby Go To Hell)”, a CHUCK BERRY on speed track, and if your favourite HELLACOPTERS era is the Dregen one, then you’ll love “Waste Me.” Definitely one of the wildest American rock’n’roll bands in 2015!/Laurent C.