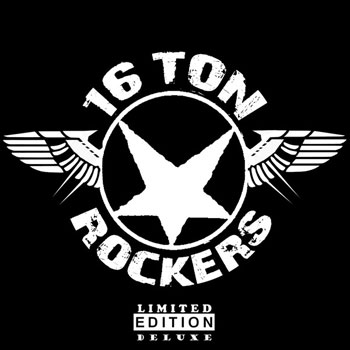 We’ve been following 16 TON ROCKERS since their first demos. Here they are again, back with a 12 song CD under their arm. While songs like “Pistol A Go Go”, “All The Fucks” “Shake Riot & Roll”, or “On The Other Side Of Midnight” were released before, you’ll also find new songs such as “Limited Edition Deluxe” and its SEX PISTOLS flavour,”Idiots On Parade” that sounds a bit like early MANICS stuff, or the anthemic “Division Svea.” The band also has its CLASH moments, especially in “Fight The Real N.M.E.”
16 TON ROCKERS recorded these songs live, so they sound as if they were playing in your room, which is quite rare nowadays when bands spend more times editing songs than actually recording them. Moreover, the glam/street punk field has been quite deserted lately so it’s good to see that some bands have not given up.
The gang offers us a cover version of COCK SPARRER‘s “Runnin’ Riot”, and it suits them very well. Now, let’s hope to see 16 TON ROCKERS on tour!/Laurent C. 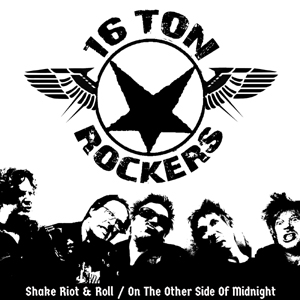 Swedish rioters 16 TON ROCKERS are back with only two songs, one (“Shake Riot & Roll”) was released before on “Kung-Fu Kicks and Recycled Licks”, and was re-recorded a bit faster, which underlines the CLASH direct line of descent, although you’ll hear a very Johnny Rotten kind of end!
“Other Side Of Midnight” is influenced by “Pipeline”, the way JOHNNY THUNDERS and HANOÏ ROCKS used to play it, with a bit of a dark feel, quite an interesting direction.
16 TON ROCKERS should have an album out in a few months if everything is ok, so stay tuned! /Laurent C. 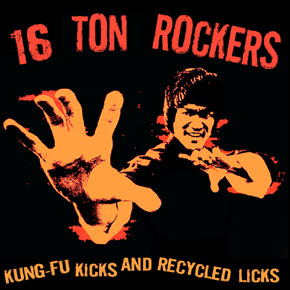 3 new songs by Swedish punk rock’n’rollers 16 TON ROCKERS:
“Shake Riot & Roll”, a direct attack towards politician scums with CLASH influenced guitars in the chorus and a SEX PISTOLS touch at the very end of it, “Fake Groove”, a classic glammy punk’n’roll tune to make you pogo with style, and “Somebody Save Me”, a catchy song that was already appearing on the band’s first demo. If you like 2nd DISTRICT and bands like this who manage to mix fine pop melodies to dirty rock’n’roll guitars, then you’ll love this one.
16 TON ROCKERS will probably record more this summer, so keep your ears and eyes open!/Laurent C. 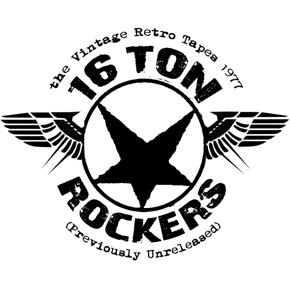 Good to hear from our Swedish rock’n’roll friend Spinx B’ Stard (SWINDLE-A-GO-GO, SALVATION STAR BRIGADE, SUICIDE PACT, etc) again. It’s been a while!
Back with 4 punk rock pistoleros, Spinx’s vocals still sound as good as in his previous bands. These guys got together last year, and chose 3 songs among lots of material to introduce the band under its best light:
“Pistol A Go Go” opens in a mid tempo rocker way, with a killer chorus made to seduce all of you HANOÏ ROCKS/SEX PISTOLS fans!
“Somebody Save Me” is probably the most surprising tracks here, a good surprise full of melodies, powerful guitars and vocals sometimes bringing the MANIC STREET PREACHERS to mind.
Last but not least, “All The Fucks” is an in your face ’77 street punk rock’n’roll song which leaves you definitely wanting more… And we want more!/Laurent C.