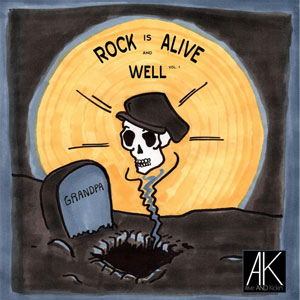 It might not be all over the big media, but rock’n’roll is still alive, and it’s not only played by grumpy old men! That’s what “Rock is Alive and Well” is all about…. Two digital compilations with great contemporary rock’n’roll bands you might have already read about on this website, or in other webzines/blogs.
In Vol.1, you’ll find two songs by The SWEET THINGS ( (“Through The Cracks of The City” and “Cocaine Ass Licker Blues”) who deliver some dirty glammy rock’n’roll somewhere between the NEW YORK DOLLS and early BLACK CROWES with a touch of THROBS thrown in, the kind of bands we all need nowadays!
The TIP, from Nashville TN play 70s bluesy rock’n’roll influenced by AEROSMITH and The STONES, and the two songs on here, “Love Me Er’y Woman” and “The Drip” (this one has a bit of The CULT “Electric” era in it) will definitely make you want to hear more.
“Sleeping Alone” and “Shakin'” both confirm that The CRY is one of the best power pop bands around, and it makes us think that they would probably be bigger already if they were a British band.
French band MEDICINE BALL CARAVAN offers us two songs from their second album, “Will You Be There” and “On The Road”, think hard rock’n’roll with a bit of Southern rock and grunge touches.
The last band on this first part of the compilation is L.A.’s best 70s glam rock’n’roll act, SMASH FASHION. If you haven’t checked them out yet, then “Marionette” and “You Love To Suffer” should make you run and order their records!
Volume 2 opens with two tracks from CREEM CIRCUS from Philadelphia, “Riff Mountain” sounds like a classic rock song you could hear on some US radio, but “Teenage Rules” has a good glammy vibe. London’s TANGO PIRATES (with Danny Fury from ROGUE MALE, LORDS OF THE NEW CHURCH, VAIN, KILL CITY DRAGONS… and Dave Tregunna (LORDS OF THE NEW CHURCH, SHAM 69, THE CHERRY BOMBZ, etc.)) offer us two songs from their album “Danger! Children at Play”: “Ghost Ship Bar Blues”, and “Dark Star”, a song dedicated to Stiv Bators. The LORDS ‘soul definitely wander around these songs.
“Mojo Motor City Queen” and “Save Me”, from The NASTY THINGS (NYC) gives us a good dose of sleaze rock, reminding me of CRYSTAL PISTOL at times, quite a good surprise!
Speaking of surprises, it seems like TATTOOED MILLIONAIRES are back, and we won’t complain when listening to “Subsonic” and “Next Big Thing”, two cool Hollywood rock’n’roll songs. MINK DAGGERS closes this compilation with some high energy punk rock’n’roll in which you’ll also find traces of early AC/DC.
Are you looking for some new kick ass rock’n’roll? Then these two compilations are for you!/Laurent C. 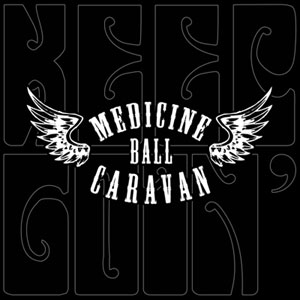 This second album is out 6 years after the band’ split! Singer Matt decided it would be a pity not to release these 8 songs, and had a few guests to help him and make it happen, including drummer Danny Fury (The LORDS OF THE NEW CHURCH, KILL CITY DRAGONS, VAIN, TANGO PIRATES…)
MEDICINE BALL CARAVAN is mostly influenced by 70s rock (“If I’m Lucky, I might Get Picked Up”, “Back Again”…), but also grunge, especially on songs like “Unleash The Dog” and “Girl” that sound like a mix of STONE TEMPLE PILOTS and ALICE IN CHAINS. The atmosphere gets close to BLACK SABBATH on “In Limbo”, harmonica and boogie drum beats add a good dose of dirty dusty rock’n’roll in “On The Road”, and “Will You Be There” definitely has a STONES touch.
If you weren’t familiar with these rock’n’rollers from Paris, then this album is a good occasion to change that. Moreover, if you want to get more into their music, their 2008 album “Crossing The Seas… Spreading The Sins” is being re-released by Alive and Kickin’ Records./Laurent C.