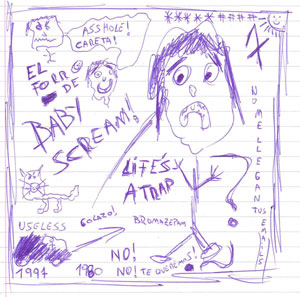 Juan Pablo Mazzola continues his musical journey as BABY SCREAM, this time showing us his softer side with acoustic songs, sometimes not so far from MARC BOLAN /NIKKI SUDDEN (“Midnight Snack”,”We Can’t Go Back To 17″,”The Ballad Of Music Biz”.) These songs will tell you stories (“Life’s Better When U’re High”, or “Climbing Down” and its MORRISSEY/late 90s MANIC STREET PREACHERS feel), sometimes in a dreamy way, just like in the late 60s/70s.
“Wish You Were a Beer” is not a cover of the CYCLE SLUTS FROM HELL classic, but a bit of an experimental pop song that will stay in your head after listening to it, and “The Road Bends” has a cool kind of groove, reminding a bit of early LENNY KRAVITZ stuff.
If you need to listen to something quieter this winter, then just try this album!/Laurent C. 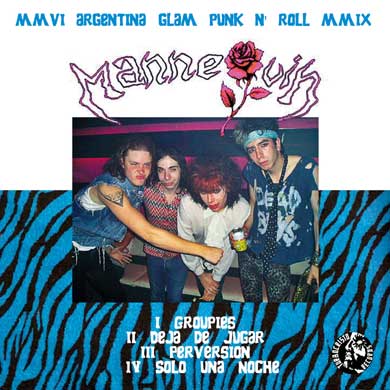 This band from Buenos Aires, Argentina doesn’t exist anymore, and these four songs (originally recorded in 2007) are being re-edited by bassplayer Roberto’s DIY record label Turbocristo Records.
Don’t expect any big production/arrangements, this is raw and dirty, but this has never been a problem in this music style, right? Remember all the late 80s/early 90s Sunset Strip glam bands that never got the chance to release their music on a proper record!
MANNEQUIN‘s poppy glam punk is quite minimal with straight to the point lyrics in Argentinian (not that I can understand the lyrics, but I’m sure that songs like “Groupies”, or “Perversion” are not about philosophy and economy!) Of course, you’ll find those typical glam punk guitars you’ve already heard in POISON, The SEX PISTOLS or CHUCK BERRY, those almost out of tune bubblegum backing vocals you’ve heard on many demo tapes, but well it works as a whole. Too much too soon? Nothin’ but a good time? Definitely!/Laurent C.