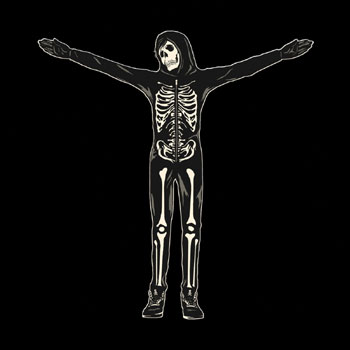 New album by French artist ALEX SINDROME (aka SINDROME) and this one is released on CD and on cassette tape (with great artwork!) “Solidaire Dans L’Isolement” brings the best of 80s French new wave to mind and sounds very appropriate in those lock down times! “Class 1987” (probably my favourite track) will probably make you remember your carefree teenage years if you can understand French and “Nos Ames En Noir” is a dark and catchy dancefloor tune. The minimal influences that could be heard in SINDROME‘s previous releases can be found in “Mélancolie”, “Vampire”, the nihilistic “Sans Issue” or in “Norma Jean” (although you’ll hear a quite powerful and haunting chorus in this one) while you’ll hear some slight disco touches in “Halloween à Neverland.” I was glad hear a bit of SIGUE SIGUE SPUTNIK in “Antonin Artaud” since I know that our man is a big fan too but you’ll also hear some Peter Hook influenced melodies in the last part of the song. You’ll also get some German industrial influences in “Dès Ce Soir” and some darkwave in “Misanthrope” before ending on an electro dance note with “Aux Fantômes.” “Fantome” is a good album to discover ALEX SINDROME‘s music if you haven’t yet and quarantine should be a good time to find out about new bands and artists, so… /Laurent C.