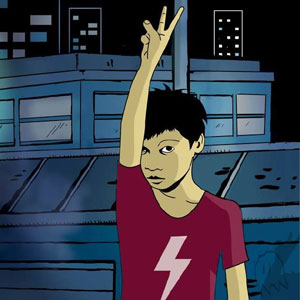 Despite their name, these three guys don’t play horror rock. FROZEN DEAD KITTENS started back in 2011 in France, and have released two EPs and one album (“Dirty Lovers Republic”) in 2013 so far. They’ve decided to get back to their rock’n’roll roots after their second guitar player left in 2014, and it seems like it wasn’t a bad idea at all. Indeed, this 4 song CD almost sounds like it’s a fresh new start, with influences such as HANOÏ ROCKS (“What They Said”, “No Fiction”) or ’77 punk (“Shelter In The Wild”, “Coming Back”), although FDK never sound vintage on this EP. The production is good, the vocals and backing vocals are solid, and the songs are catchy enough to stay in your head just after you’ve listened to them once. Good job, guys! Laurent C.