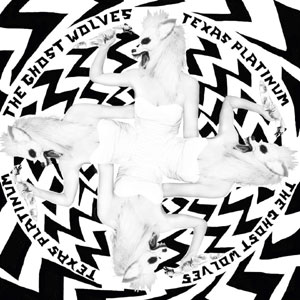 This guitar duo from Austin, Texas was formed in 2011 and bring us their second album, released by German record label Hound Gawd records! 14 songs of garage punk with a riot grrl touch that sometimes bring a band like BABES IN TOYLAND to mind. “Attitude Problem” and “Strychnine In My Lemonade” both display the punk rock’n’roll side of the band, while “Crybabies Go Home” sounds as if The CRAMPS have been on a heavy psychedelic diet. Carley Wolf’s, almost childish vocals sometimes remind me of QUEEN ADREENA, and Jonathan Wolf’s wild and natural drumming sounds very refreshing in this world of pro-tools editing. The band’s minimal musical approach can especially be heard in “Triple Full Moon”, and keeping things raw, without tons of arrangements is something that fits them very well, a bit like early bluesmen when you think about it (“DYGKD” confirms this a the end of B-side.)
The band cites The KILLS as an influence, and it shows a bit in songs like “Whettin’ My Knife”, “Vroom Vroom/$$/I Got Money $$”, or in the bluesy “Bunny Run.” Blues sometimes get doomy in “Shouldnt’ Have Lied” or in “Noisy Neighbors/Yuppie Scum”, but the chaotic spirit remains.
You can hear some exciting live energy on “Texa$ Platinum”, so there’s no doubt that The GHOST WOLVES must be an amazing live act. The limited edition “ultra clear blood hazed” vinyl looks great, which is always a big bonus. /Laurent C.