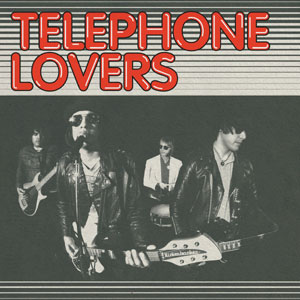 The US powerpop scene has been very interesting these last years, and it seems like bands keep on appearing! TELEPHONE LOVERS, from Long Beach, California, are no exception, they have the looks, the hooks, and the glam touch that make modern American powerpop so cool. They remind me of PRIMA DONNA on “Without You”: 70s BOWIE riff, sexy bass and JERRY LEE LEWIS piano, it’s only rock’n’roll, but I love it! “Lil’ Bit O’ Money” and “Saw You Standing There” have a TOM PETTY feel to them, and if you’re into proto-punk, songs like “Take You Home”, or “Turn It Around” will probably be your favourite ones.
“Gone For The Summer” is a real rock’n’roll song, “At The Station” will make you dance, while “Come Out Tonight” and “No More” will stay stuck in your head like a CANDY song!
If you need one more good reason to check out TELEPHONE LOVERS, let me add that they have HOLLYWOOD BRATS in their influence list!/Laurent C. 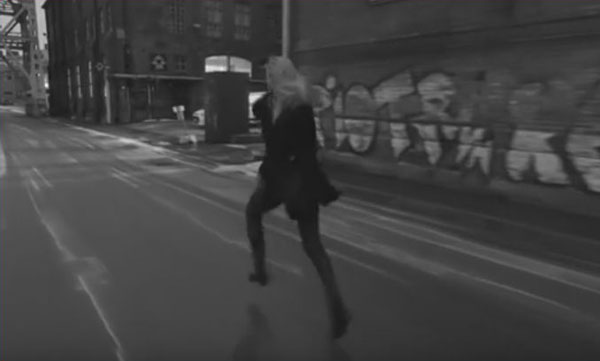 “Run Rabbit Run”, the new PLASTIC TEARS video is also the first single of “Smacked!” (A Tribute to SMACK‘s lead singer Claude) that will be out on French record label Alive and Kicking Music.

For more info and pre-orders:

In recent years, summa my stubborn old farmboy mechanic and over-caffeinated biker friends have stupidly told me how they still hate Morrissey, to which I’ve responded that “First Of The Gang To Die” was the second best Mott The Hoople song that Ian Hunter never wrote and that Mozzer was the only rockstar I knew of who rocked significantly harder in his fifties than he did in his twenties. Well…I may have been wrong about that last bit, ’cause Showbiz Al, lead mojo risin’ of CIRCUS OF POWER, is still churning out a steady and prolific stream of books, videos, and satisfyingly old fashioned, long-player, full-length albums on compact disc, that rocks every bit as hard as the classic lineup of Circus Of Power, and sometimes, even delivers exactly what you’d hope a modern-day CIRCUS OF POWER song would sound like-all shiny chrome, black exhaust, red brassieres, and voodoo dolls. I’m still not used to reviewing loosey goose individual tunes available on I-Tunes and Youtube and shit, but I think this tune was on his last silvery disc but only now made it to the big little screen, but it is positively anthemic and life affirming, even as it laments the death of our dreams of liberty and fairness, decency, and justice…I so vividly remember staring at that rising sun Circus Of Power album jacket for hours while I blasted “In The Wind” and “Call Of The Wild” and “Needles” through the p.a. speakers at my old jam house in the country, “come on baby turn up those jams, goddamn” was our way of life, back then.
Me and my buddies Bastard, Dave, Mick, and Cowboy Bob used to travel thousands of miles to see that band whenever we heard they were playing. We were totally into that band as an unruly teen pack of leather clad ruffians, we even covered summa their songs, but we were all aces and eights and had to play the hand we were dealt. After lighting many candles, waiting vigil for the other guys year after year, Al’s finally assembled another band lineup that sails under the old flag and while I haven’t learned their names yet, they bring the old danger, so even if you diehards are still missing Gary and Ricky, Zowie, and Ryan, or even Al’s chief henchman of more recent years, genuine space ace, Lunar Billy Tsounis, who co commanded that Battlestar Galactica rocketship, CAPTAIN ZAPPED, Al always manages to locate all the meanest mothers on the planet to fill out his snarling sonic and celluloid ranks and believe me, you wouldn’t wanna run into any of these guys on an L.A. overpass in the middle of the night. They all look like killers. Gang members. One percenters. People who failed their audition for Suicidal Tendencies. American Monsters. His tune is like an Allen Ginsberg cinematic protest poem from another time about how this country was built on Sitting Bull’s land and pillaged by ruthless honkies and slave owners and prison builders and deep state spooks who killed JFK and Martin Luther King on tv and crowned those MK Ultra’ed teenage queens and how even Superman can’t save us now, he’s released it with impeccably perfect timing, now that one of Howard Stern’s frequent old scandal spewing, outrage peddling, shock-jock, talk radio guests has become President and made Rex Tillerson, the Exxon exec, into Secretary Of State. Scotty Slam directed this kickass video, filmed on rooftops as a nod to the old “Vices” era, and featuring Finnish Vampire, Jyrki 69, muttering Manson girl witchy incantations, while Alex Mitchell and his latest motorcycle gang play the shit out of this driving, hooky song, that makes you wonder how the movie stars and muscle cars of Jim Morrison’s phantastic old L.A. all became the panopticon hellhole of present day NSA and NDAA and TSA prison-culture nightmarish modern ‘Murkkka, “ride that death machine, crown that teenage queen…” Even in his middle age, Showbiz Al is still a commanding and visceral screen presence with his Bryan Gregory bone necklaces and witchdoctor pimp sticks. They filmed part of this in what looks like some fortune teller parlor, and it really captures the dizzying, stopless, all night ambition of America’s coked-up population of stockbrokers, rats, dirty cops, acquisition junkies, control freaks, I-phone zombies, war profiteers, and hungry ghosts, all rat racing to nowhere, or Home Depot, or Hooters, flooring that pedal to beat you to the next red-light. Go! STOP! Go! STOP! Go! STOP! Go! STOP!! Alex Mitchell is a beloved underground anti-hero, one of our last really good, red blooded, brave hearted, all-in, lifer-dedicated rocknroll entertainers who can write, sing, and perform with style and class and an easy confidence and a social conscience and guts, urging us to freak freely even in the unblinking face of hateful fascism. Dig it! 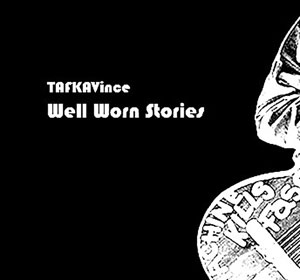 “Sometime you have to speak of the times and share it with the world as soon as possible. This is one of those instances” says Chicago rock’n’roller TAFKAVince.

“Well Worn Stories” was written last weekend, and full purchase of every sale will be donated to the ACLU (American Civil Liberties Union.)

The music of this power trio from Estonia could be described as action rock, or high-energy rock’n’roll, this style that was especially popular in Scandinavia in the early 00s. Opening track “No Talkin’ All Action” confirms this with a spicy HELLACOPTERS/BACKYARD BABIES flavour, while a strong TURBONEGRO influence can be heard in “Gimme Shock.” You’ll probably also hear The CULT in “Rock’n’Roll War”, but well, the riff was originally taken from The STONES anyway. I was expecting a bit of 70s glitter rock in “Listen To T.Rex”, but it seems like the reference is mainly in the lyrics.
“C’mon C’mon”, “Gotta Make Noise” and “Shimmy Shake” are catchy and fun punk rock’n’roll songs designed to make you party hard, and if you like The JOYSTIX or BITCH QUEEN, then big chances are you will enjoy DEAD FURIES.
Nothing new under the sun, but who cares when it’s raining! /Laurent C.

Following the 2015 debut album, “Lipstick II” takes us to another colourful space travel starting with “On The Eve of The Attack”, which sounds like a quite surprising mix of BOWIE and MEAT LOAF! “Fight Back”, “Cha La Head Cha La”, or “Girl Dressed as a Sailor Moon” have a more 80s L.A. glam metal sound, and sound quite catchy.
The album was recorded with many guest musicians, so it adds more variety, and songs like “Stop”, “Love of Some Kind” and “Teenage Girlfriend” have big theatrical elements to them which fits well with the image and concept of LIPSTICK. Some glam punk/70s glitter traces can be found in “Fake Nerd Girl”, “Rock’n’Roll Anime Girls”, “Stop Drop and Rock’n’ Roll”, “Christmastime Machine”, or “Gotta Eat When You Can”, and you’ll even hear some ska punk in “Lipstick Encourages You To Have Fun at our Show but not at the Expense of other Concertgoers”…
15 songs is a bit long for an album in that style, it probably would have been much better as a 10 song record, but it doesn’t ruin the fun./Laurent C.

Swedish rock band VCPS has released a new song/video, “Didn’t Go To Church.” Check it out!:

February 1st, 2017 – Neon Coven, the new industrial rock band from Los Angeles, CA, has released its debut EP “Risen” today via New Ocean Media. Recorded in Hollywood, the EP was produced by Jacob Bunton. The EP consists of 4 tracks ranging from songs about survival and balance to emotionally charged anthems.

The EP can be streamed at this location: https://open.spotify.com/album/1DSKprFqDMWhoj8ttiY5d8

The album’s title Risen is a dedication to the fallen and broken who refuse to back down and give up on their dreams. “The idea behind music is to connect, create and inspire” states frontman Anthony Montemarano. “Between life and death, we are always riding the quantum edge.”
“These songs reflect on the uncertainties of life and coming to grips with our own mortality” adds bassist Jacob Bunton. “The only guarantee we have in life is that one day it will end. It’s up to each one of us to create our own destiny and live life to it’s fullest. The world is full of ups and downs, but I’ve always believed in the Rocky Horror quote ‘if you can dream it, you can be it.”

From Los Angeles, CA, Neon Coven abandoned much of the ethos of the tradition of heavy rock to create an intellectual and theoretical sound, linked to an emphasis on anthemic, synth-heavy dance-rock.