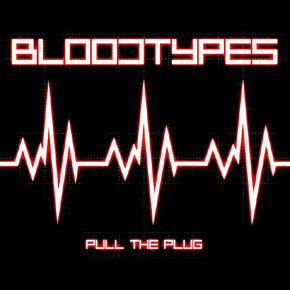 Second album, by Portland’s finest ’77 punk/new wave rock band! The BLOODTYPES have been spreading their toxic sci-fi synth punk disease all over the US and Europe these last years, and their songwriting only improved on this new album.
The band’s energy reminds me of X and early SIOUXSIE AND THE BANSHEES on songs like “Panic”, or “Bored”, “Rejected”, or “Virtual Reality” while their sense of 80s synth melodies in songs like “Going Away” or “Surveillance State” gets closer to BLONDIE (“Television Dreams”), or The REZILLOS.
Punk sometimes has a bit of a garage taste in “Spy”, and you’ll get some darker, horror surf injected atmosphere with “Space Mutants”!
“Modern Love” is a potential hit, it brings space love stories and neon night club romances, mixed to 1978 Berlin images!
The vinyl looks great, and you’ll get a download card with it, so that’s at least two more reasons to get this record!/Laurent C.