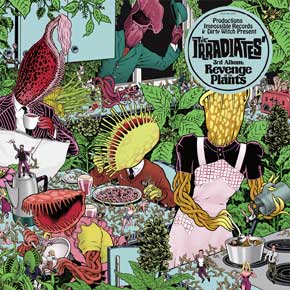 Watch out! France’s best cosmic surf punk band is back with 12 new songs recorded and mixed by Jim Monroe (CJ Ramone, The ADOLESCENTS, etc.) in Besançon, France (Cube Studio.)
“Revenge Of The Plants” is mixed in a more old-school (trad-surf rock) way than the band’s previous releases (Their 2010 release “Audio Mental Manipulation Device” was recorded by Steve Albini, and thus had a more “indie/punk rock sound”), here guitars from Dick Den’s and Arno DeCea are orgasmically fighting with each other (“Locked In The Chromatic Spectrum”, “Malherbologie”, “Audrey Jr.”) while Buanax and Macst’s groovy punky rhythm section solidly stands in the back.
You’ll hear some raw guitar riffs mixed to moody ones in songs like “Shut Up. Let’s Grow” or “Parola 12345678(9)”, some classic rock’n’roll guitars and punk rock vocals (“Jack-In-The-Pulpit”, or the amazing “Tales Of A Poisoned Seed” and its DEAD KENNEDYS vocal touches), and clever tributes to the pioneers of surf music (Link Wray, Dick Dale, etc.) in songs like “Caulerpa Taxifolia”, “Unidentified Wild Flower”‘ or “Sap Rain.”
Ending on a dramatic note with a track called “Herbivore” (not too surprising for a vegetarian band, right?), “Revenge Of The Plants” will drown your mind in a colourful Sci-Fi, B-Movie sea while your feet won’t do anything but dance!/Laurent C.