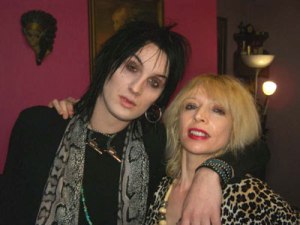 After enjoying the privilege of being able to do this interview with Nina Antonia, I finally came to the decision of asking her a few questions about her latest news, but I think that nobody would have forgiven me if I had not asked anything about her past as well…

Nina, you were born in Liverpool so it would have been quite logical for you to be a BEATLES fans (or a football supporter), how did you get attracted to Glam Rock?

I got attracted to Glam as a reaction to Liverpool. I must explain that Glam to me meant Marc Bolan and the New York Dolls, I wasn’t really interested in anything else at the time altho Bretty Smiley’s tv appearance on the Russell Harty was also influential. Now I’m older I realise that the Beatles really were significant, however growing up in Liverpool in the 1960’s liking them was practically mandatory, I mean they were WORSHIPPED. I’ve always turned away from anything that one is told you are supposed to be into. As for the football thing, it was just to muddy and sweaty to interest me.

Can you tell us about the first time you met Johnny Thunders? How and when?

The first time I met Johnny was in a pub in London, in Soho, I guess it was 1982 or 83. It’s quite staggering that it’s now over 20 years ago. An informal meeting to talk about my writing his biography had been arranged. When he walked in the bar he had this insolence about him but he wasn’t arrogant. I remember his clothes were frayed and a little grubby but he was so cool like something out of a Martin Scorcese movie. Suprisingly, he was pretty shy and so was I so we got along fine.

This era seems to have had a big impact on you and your life, are you nostalgic a lot when you think about those times?

I’m nostalgic for the times spent with Johnny and Jerry Nolan and for meeting wonderful people like Stiv Bators. I’m nostalgic for the fact that I’ll never hear Johnny play guitar on stage again. Watching footage on DVD doesn’t come anywhere near the experience. I’m nostalgic too that the 80’s reperesented the fading days of a less money orienatated culture. MTV, capatilism and conservatism have conspired to create a homogenised rock and youth culture. This week a scene from a play has been cut in England because some of the people were supposed to smoke cigaretttes. If you light a cigarette up in the street here people look at you as if you’ve just got a crack pipe out. Johnny Thunders would have told them to all go fuck themselves and I second that emotion.

Johnny appeared in “What About Me” and “Mona et Moi”, do you think he could have had a career as an actor?

Johnny had a lot of presence and would have been fabulous in The Sopranos or being directed by Martin Scorsese.

Like Bob Gruen, I suppose that people always ask you about the DOLLS and Johnny, isn’t it annoying sometimes?

It depends on the questions people ask!!!

In the New York Doll documentary, Arthur Kane seemed so happy to be able to play with the DOLLS again, what did you feel when you first heard about the band reunion?

I had mixed emotions about the Dolls reunion. I was happy for Arthur and Sylvain because they’d both suffered in the wilderness but I was incredibly sad that Johnny and Jerry weren’t going to be there.

It must have been a real shock for you when Arthur died. Can you tell us a bit about him? Were David Johansen and Syl Sylvain right to keep on playing without him?

It was so sad when Arthur died because he was such a sweet guy. I remember being at home crying when one of the documentary makers phoned up and very gently reminded me that at least Arthur had his dream come true and was now in God’s care. If anyone was meant for heaven it’s Arthur Kane. HOWEVER I really don’t like the travesty that is currently masquerading as the New York Dolls and I hate it when people tell me they’ve just seen The Two York Dolls play and wasn’t it great. How could it possibly be the New York Dolls without Thunders, Nolan and Kane? That album they put out was awful. If the band were gigging as David’s Dolls or used a variation on the original name I really wouldn’t mind at all and wish them all the very best.

You’re the manager of a band now (The SKUZZIES), is it the first time that you’re managing a band?

Yes indeed it is the first time I’ve managed a band and it just kind of happened. Of course I have a personal interest in it because their front man, Crooked J, is my partner. When I first started going out with him he’d kind of given up on having his own band because life had been pretty tough for him but I encouraged him and ended managing The Skuzzies by default but as business isn’t really my forte I hope at some point an established manager can take over.

Do you think that your notoriety can help them in a way or another?

I really don’t know…………it helps in someways, on an underground level but the upper echelons of the rock music industry tend to be controlled by a cliquey white middle class mileau. It’s hard to break out of the trenches but we’re prepared to die trying. You have to leave your mark.

It seems like there’s more and more glam/punk bands in the UK these days, what’s your opinon on that?

There’s an epidemic of all kind of bands in the UK at the moment but it’s a case of quantity rather than quality. The only other new band I’ve seen that has registered with me is an outfit called Like A Bitch. They are playing with The Skuzzies next week.

Any advice to someone who whould like to get into the rock’n’roll world in order to write a best-seller?

If you want to write a rock n’ roll best seller, it helps to be male because of entrenched attitudes and if you want to make a profit go for an obvious subject. However, if you want to write something that you put your heart and soul into and that goes against the mainstream despite having a dedicated readership you probably won’t make a penny or a franc or a cent !!!

You wrote about Johnny Thunders, The NEW YORK DOLLS, Peter Perrett and Brett Smiley, what band or artist could make you write about them now?

I’d write about The Skuzzies, not just because I manage them but because they’ve got a great story – struggle, survival and street life.

One of my friends has this crazy dream to know what Billy Rath has become… Any indication?

I really don’t know if Billy Rath is dead or alive. Sometime ago I heard he was no longer on earth but then I also heard he’d become a preacher of some sort and was residing in New Jersey. Wherever he is, I hope he’s doing okay.

Did you know this band from NY, The Harlots Of The 42nd Street? Some people say they should have become as famous as The DOLLS…

As I never got to hear The Harlot’s music I couldn’t possibly answer as to whether they should have become as famous as The Dolls. All I ever saw about them was a picture in the NME. They didn’t look they had The Dolls savvy but I liked their name !!! (smile)

Your books can only be found in English, any chance to see them released in other languages?

I hear from people all the time who’d like the books to come out in different countries but I’m powerless unless the impetus comes from either one of the publishers here or a company abroad. I’d love an agent to take care of things for me, but the same privileged middle class lock down that exists in the music industry is even more apparent in the world of agents and publishers. Right now my books just rattle along like the night train picking up readers of their own accord. I’d love them to be available in translation so start petitioning publishers wherever you are!!!