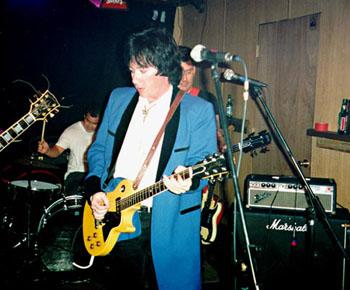 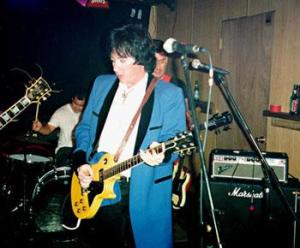 Jeff Drake, guitarist/vocalist for the legendary JONESES is coming back into the lights thanks to Full Breach Kicks records, so it was time for us to get news from this odd and exceptional musician…

Well, it’s hard for me to be objective. Kind of in a transitory state. Getting my degree (who knew?) I hope to be Dr. Drake someday. Maybe making a musical comeback? Mid life crisis.

Were you surprised to see that Full Breach Kicks wanted to re-release « Tits and Champagne »?

Yeah those songs were originally just demos and stuff. But it was very hard to find so I guess I’m not surprised.

What about the live album and the live DVD that are supposed to be released soon on the same record label?

Still working on that, I’ve been editing the live video for the DVD & so far out of about 12 hours of stuff, I found about 10 seconds that’s fit for public consumption. We really blew. Like a Hoover.

In the 80s, you were seen by many as a kind of West Coast Johnny Thunders, do you understand and accept this comparison?

Well, yeah I do. At one point he was a big influence. But I was kinda already like that, growing up on Chuck Berry & Bo Diddley & Keith Richards and all. But Johnny Thunders was a genius in the Dolls, so I don’t really think that I do compare. He was the proto-type for lots of guys. I think I was more country though.

Over the years, The Joneses has often been referred as a cult band, I guess you’re quite proud of it, aren’t you?

Fuck no! Cult band means you’re broke all the time & no one knows who you are. It’s like a consolation prize, or parting gifts. No thank you. Sounds like a religion.

What were the reasons for the end of the band?

I didn’t wanna do it anymore. I thought Amanda Jones & the Vice Principals were both better bands, just later & not so much of me.

Is excess obligatory to create a legend around a rock band?

“The road of excess leads to the palace of wisdom” I think that was Rousseau or Voltaire or one of them smart Frenchies.

Is there any possibility to see a Joneses reunion some day?

I’m sure someday somewhere there will be. I don’t know which Joneses would wanna do it though. Seems like nobody gets tired of those songs except those of us that have to play them.

Why do The Vice Principals (the band with your brother Scott) never released more than one album?

We broke up. That was never really meant to be a real band anyway. More of a swindle. Hee Hee. Too much genius for one band. Really. I mean it.

Jeff Drake back on a stage would probably make many people happy… so?

Some young bands sometimes say that they’ve been influenced by you, do you feel close to some of them in any way?

They are the children I’ve never known. Did they bump their heads when they were young?

I heard that some amateur reviewer once said that you’re not humble, what do you answer to that?

A very astute observation on his part. I see a brilliant future in Journalism for him. I am humble compared to some…..

The Humpers or 8-Foot Tender?

Why you asking me? 8 Foot Tender! Jeff Fieldhouse is the King of Portland OR!

A last word for your fans?

“Only in the savage forest of vice can new domains of wisdom be conquered”.

Thank you very much Mister Drake.